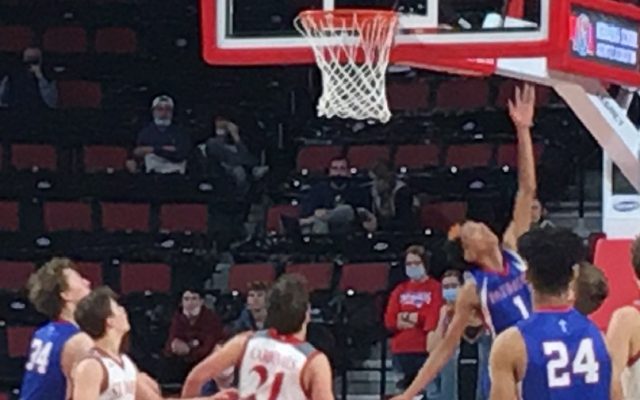 LINCOLN–(KLMS Mar. 11)–It was a game that was locked up at halftime, but almost given away by the Parkview Christian boys basketball team.

A 18-point lead early in the second quarter slowly diminished to a two-point lead in the fourth quarter, but the Patriots held on for a 62-53 victory over O’Neill St. Mary’s to advance to Saturday’s 3:45pm Class D2 State Championship game against Falls City Sacred Heart, which will be carried on KFOR FM103.3/1240AM and kfornow.com.

The Patriots were up 31-14 at a halftime, but were plagued by fouls with their two top scorers, Jaheim Curry and Mark Lual.  Curry ended up finishing with 20 points and Lual, who had 14 points at halftime, ended up with 18 in the game.

St. Mary’s (23-4) started to attack the basket more in the second half, prompting players like Lual and Parkview Christian guard KeShawn Moore to sit out a few minutes at a time and not waste any more chances for them to foul out.  Aidan Hedstrom scored eight of his 19 points in the third quarter and pulled the Cardinals to within seven, 42-35, heading into the fourth quarter.

Then Connor Semin, St. Mary’s lone senior, nailed a three-pointer with 5:57 left in the game to cut the deficit to 44-42.  Then Curry responded with a reverse layup on the other end and Parkview Christian was able to stay ahead the rest of the game.

St. Mary’s later got to within three, 56-53, but the Patriots managed to connect on free throws and held on for the victory.

Michael Ault added 12 points for Parkview, while Semin and Tate Thompson each added 11 points for St. Mary’s, who will play Humphrey St. Francis for third place at noon Friday at Lincoln North Star.