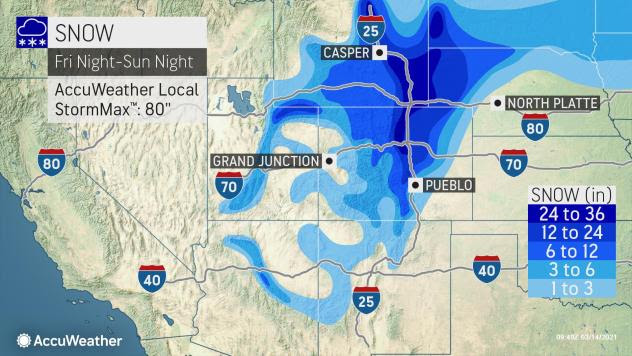 (KFOR NEWS  March 14, 2021)  AccuWeather Global Weather Center   Only a few days are left in winter, but that isn’t stopping Mother Nature from pulling out all of the stops in the last stretch of the season in the central and southern Rockies.

A developing storm that AccuWeather meteorologists have been monitoring for two weeks is clobbering parts of Colorado, Wyoming and Nebraska with a potentially historic snowfall that could bring travel to a standstill.

By 8 p.m. MST on Saturday, the snow was already starting to pile up. Weston Pass, Colorado, reported nine inches of snow accumulation, while other parts of the state reported around two to six inches.  By midnight MST, Denver International Airport had already recorded 7.2 inches of snow.

As the snow fell, conditions on Interstate 70 began to get “treacherous,” around 7 p.m., MST. Colorado State Patrol announced a westbound closure at C-470, with all traffic being diverted east on Colorado 470. A full closure is in both directions from Silverthorne and the Denver Metro Area.

Along I-25, conditions began to worsen as well. The National Weather Service in Boulder reported that roads were getting “slushy.”

AccuWeather forecasters say that Cheyenne, Wyoming, will be in the storm’s bull’s-eye and could potentially pick up the biggest snowstorm in the city’s recorded history. The city was already about a third of the way to the record Saturday evening, with the heaviest snowfall yet to come.

Denver may not set a new snowstorm record, but the Mile High City is still expected to be buried under hefty snowfall — and the hardest-hit areas could be left digging out from snow that would almost fully bury an NBA player, with an AccuWeather Local StormMax™ of 80 inches predicted.

Winter storm warnings were plastered across southeastern parts of Wyoming and northern Colorado, and winter storm watches extended farther east across southwestern South Dakota and western Nebraska on Friday. An avalanche watch was also posted for the Front Range mountains in Colorado. The wintry blast could feel all the more shocking because it is following closely behind springlike weather in some places like Denver, where temperatures averaged nearly 20 degrees above normal earlier this week.

Colorado Gov. Jared Polis announced on Thursday that he activated the Colorado National Guard to respond to search and rescue requests through the state’s Emergency Operations Center from 12 p.m. Friday until 12 p.m. Monday.

15 hours ago
Connect With Us Listen To Us On