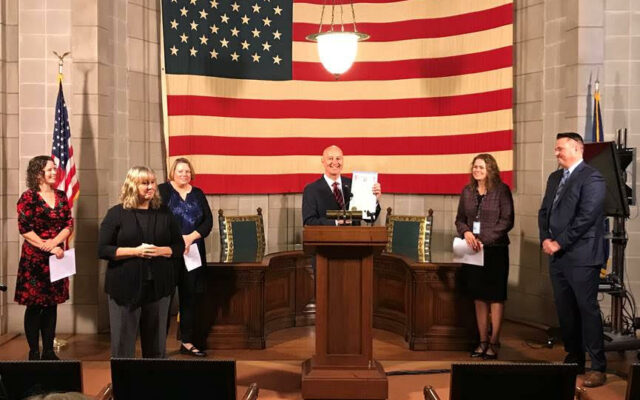 LINCOLN, NE (November 15, 2021) –  Governor Pete Ricketts has designated November as “Adoption Awareness Month”.  Stephanie Beasley, Director of the Division of Children and Family Services (CFS) for the Nebraska Department of Health and Human Services (DHHS), joined the Governor to celebrate adoptive families.  She emphasized the need for additional families to provide a home and sense of belonging to the 600+ youth in Nebraska awaiting adoption.  Gov. Ricketts and Director Beasley both noted that adoptions in Nebraska have declined during the pandemic, and they urged parents to consider providing a permanent home to a child in need.

According to the Governor, 350 youth were adopted last year, and Nebraska is on pace to see the same number this year.  However, he said, several years ago the State was seeing around 500 per year.  He said it’s believed that the Pandemic has cut into the number.

Maralee Bradley, an adoptive and foster care mother, talked about the blessing of adoption—both for children who find a loving family and for the parents who chose to open their homes to an adopted son or daughter.  She underscored the important contributions made by grandparents, teachers, therapists, coaches, and friends to support families who adopt.

Ryan Stanton, CEO of Compass, highlighted the life-changing impact adoptive or foster parents have on the life of a child.  He called on all Nebraskans to find a way to volunteer their time to support families through the journey of adoption.