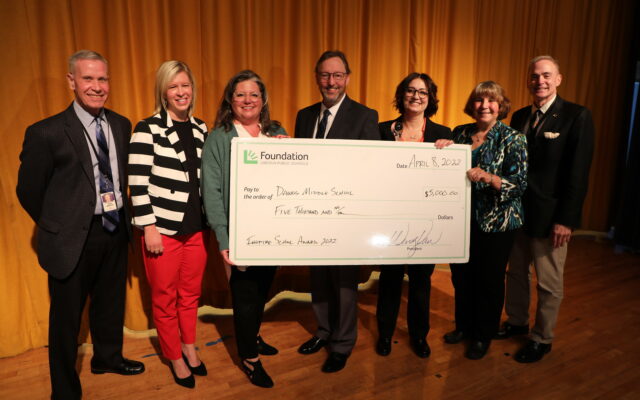 (KFOR NEWS  April 11, 2022)   On Friday, the Foundation for Lincoln Public Schools announced that Dawes Middle Schools was awarded the 2022 Inspire School of the Year Award to students and staff during a special assembly.

“One of the best parts of being a superintendent is celebrating the success of staff and students,” said Steve Joel, LPS superintendent, during the surprise announcement. “Dawes Middle School staff have worked extremely hard to help students achieve and create a positive culture here at Dawes; and principal Miller has worked to increase staff input and leadership, and also listens to student voices to build a positive culture. It is clear that Dawes Middle School values the lived experiences of all Dawes community members, and sees those experiences as strengths.”

To be considered for the Inspire School of the Year award, principals must detail the initiatives that have led to accomplishing considerable progress toward their school improvement plan. A selection committee comprised of community members, LPS District Office staff and the Foundation Board of Directors select the school that had the most significant impact on the students, staff, faculty and the community.

“Dawes’ focus on building and strengthening their school community culture is evident in all that they do,” stated Wendy Van, president of the Foundation for LPS. “The improvements in student engagement in the last year and a half are a direct result of that effort and should be applauded.”

As part of the award, Dawes Middle School will also receive a check for $5,000 to use on any upcoming project of their choice. Funding for the award was provided by Allstate.

In addition to awarding Inspire School of the Year, the Foundation for Lincoln Public Schools also surprised one student and one staff member from each school with an Inspire Award. Each Inspire Award recipient was selected by their school principal for regularly going above and beyond, taking initiative and are a positive inspiration to others.

You can see a list of all the student and staff honorees at these links: