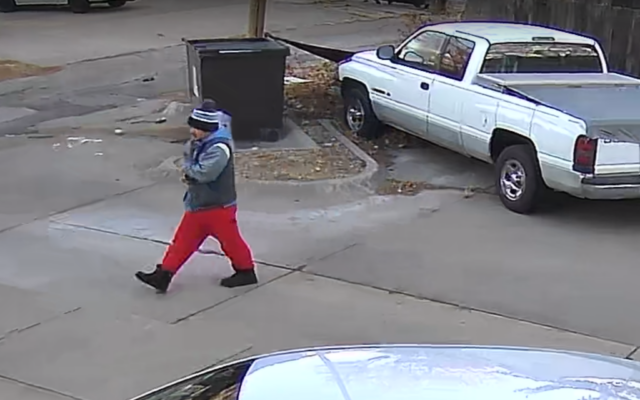 Suspect in Sunday December 4 rock vandalism near Goodhue and C where a rock was thrown through a window causing $200 damage. (photo courtesy LPD)

(KFOR NEWS  December 9, 2022)  Between December 1st and the 5th, Lincoln Police investigated 16 vandalisms where rocks were thrown thru windows.  All in the NE part of Lincoln with the exception of one.

On Sunday the 4th near Goodhue and C, a rock was thrown through a window causing $200 damage.  Surveillance video shows a male with a moustache wearing black boots, red pants, a dark colored stocking cap with white/blue stripe and what appears to be a blue hoody under a grey coat.

The man believed to be responsible for all the NE Lincoln vandalisms is 20-30 years old. He wore black pants, a red chested sweatshirt with grey sleeves and a stripe.

Anyone with information regarding any of these incidents is encouraged to contact the Lincoln Police Department at 402-441-6000 or Crime Stoppers at 402-475-3600.