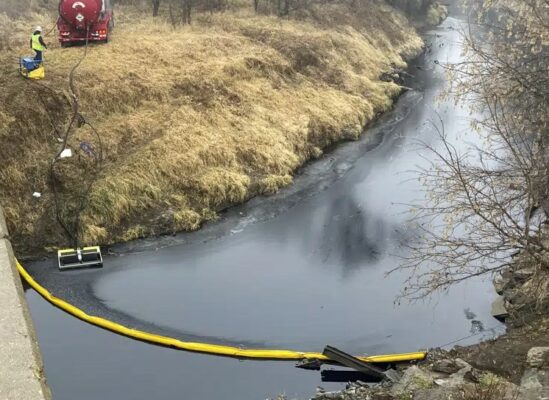 A remediation company deploys a boom on the surface of an oil spill after a Keystone pipeline ruptured at Mill Creek in Washington County, Kansas, on Thursday, Dec. 8, 2022. Vacuum trucks, booms and an emergency dam were constructed on the creek to intercept the spill. (Kyle Bauer/KCLY/KFRM Radio via AP)

MISSION, Kan. (AP) January 10, 2023 — The Environmental Protection Agency announced Monday that it has reached an agreement with a pipeline operator to clean up a spill that dumped 14,000 bathtubs’ worth of crude oil into a rural Kansas creek.

The agency said in a news release that the Dec. 7 rupture of the Keystone pipeline affected 3 1/2 miles of the creek as it flows through rural pastureland in Washington County, about 150 miles (240 kilometers) northwest of Kansas City.

The order requires TC Oil Pipeline Operations Inc., whose parent company is Canadian-based TC Energy, to recover oil and oil-contaminated soil and vegetation and contain the further spread of oil in the creek.

Meg McCollister, an EPA regional administrator, said in a statement that the federal government and the state are “committed to a thorough cleanup and restoration.”

The cause of the 14,000-barrel spill hasn’t yet been announced. Each barrel is 42 gallons, the size of a household bathtub.

But U.S. Sen. Maria Cantwell, a Washington Democrat who chairs the Senate Commerce, Science and Transportation Committee, raised concerns in a letter Monday about the decision to grant TC Energy a permit that allowed the pressure inside parts of the Keystone system — including the stretch through Kansas — to exceed the typical maximum permitted levels.

“This latest spill is no surprise,” Cantwell told the deputy administrator of the Pipeline and Hazardous Materials Safety Administration in demanding a review of the permit.

The spill was the largest onshore in nine years and larger than 22 previous spills on the Keystone system combined, according to U.S. Department of Transportation data.The company and government officials have said drinking water supplies were not affected. No one was evacuated, and most of the Keystone system was back in operation in eight days.

Concerns that spills could pollute waterways spurred opposition to plans by TC Energy to build another crude oil pipeline in the same system, the 1,200-mile (1,900-kilometer) Keystone XL, across Montana, South Dakota and Nebraska. President Joe Biden’s cancelation of a permit for the project led the company to pull the plug on the project last year.