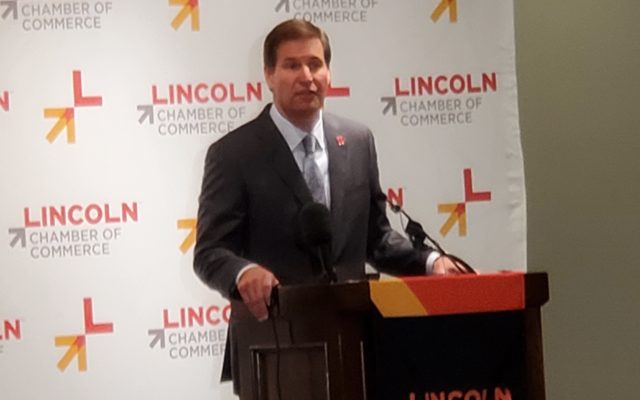 Lincoln, NE (August 17, 2021)  Lots of rumors and talk show speculation lately about possible changes in college football’s major conferences, particularly since Texas and Oklahoma announced that they would move to the Southeast Conference.  There likely will be changes in the future, not only in Conference memberships but also in the Governance of College Athletics, according to newly appointed University of Nebraska-Lincoln Athletic Director Trev Alberts.

“There’s been talk about an alliance with the Big Ten and the Pac 12 and the ACC.  I think as we move forward, when we talk about how College Athletics is structured, I think you will see some change.”

Speaking before members of the Lincoln Chamber of Commerce, Alberts said the days of the N-C-A-A holding all the power are probably coming to an end.

“I think you’ll see some of that power in that structure being shifted from the N-C-Double-A, and perhaps at the Conference level, to the Conference Commissioners and those alliances will be very, very important as we sit at the table and try to make sure that we have a Governance structure that’s compatible with the mission and the values that Schools like ours in the  Big Ten hold dear.”

Alberts said it’s uncomfortable for him to admit, but the TV networks hold a great deal of power in the world of College Athletics today.

The newly appointed head of the Husker Athletic Department said College student athletes have a lot more than sports on their minds these days.

“They have their cell phone, all of their social media stuff, now they’re thinking about doing N-I-L deals, think about where their brain is.  And, they’re trying to balance Football, and all the expectations there, all of what happens on social media, they’re trying to balance getting their education in four years, I mean it’s a whole different deal that we’re asking these young men and women to deal with.”

Alberts said the transfer portal, and name, image and likeness deals are making the job much harder for coaches and athletes lately.