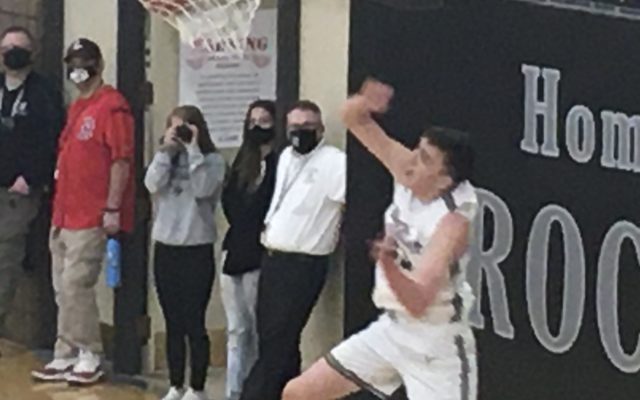 LINCOLN–(KFOR Jan. 14)–After only scoring three points last Saturday in a 31-point loss to Class A No. 5 Lincoln Pius X, Lincoln Northeast senior guard Pierce Bazil got back on track Thursday night against Kearney.

Bazil scored 13 points in the first quarter, which saw Northeast take off to a 24-8 lead. Senior guard Zachary Moerer helped out offensively in the second quarter, by connecting from 3-point range on three occasions to build the Rocket lead by as much as 24 points. Moerer wound up hitting four, three-pointers and scoring 16 points in the game. Northeast’s lead at halftime was 42-24.

The Rockets (6-2) forced Kearney to commit 18 turnovers in the game. Northeast’s 6-7 senior center Connor Renard, who added 15 points in the win, also had five blocked shots in the game.

Entering the fourth quarter, the Rockets built up a 63-40 lead, but the Bearcats cut the deficit down as much as 12 points, after Preston Pearson scored with three minutes remaining to trimming Northeast’s lead to 71-59. Then Bazil capped a 7-0 Northeast spurt with a dunk in transition and a layup on a fastbreak.

Kearney, who fell to 6-5, was led by Jack Johnson’s 17 points, while Pearson and senior guard Easton Bruce each added 12 points.