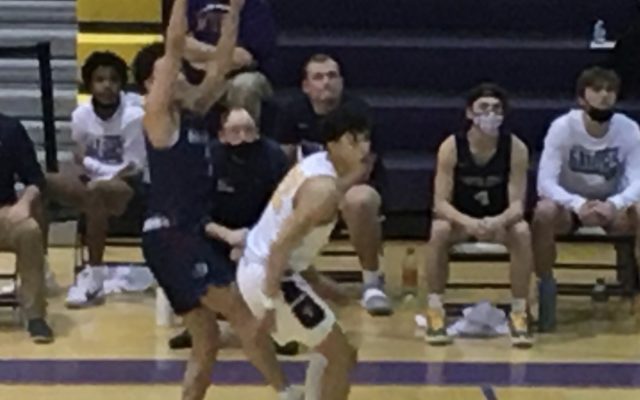 BELLEVUE–(KLMS Mar. 1)–It took about eight-and-a-half minutes for top-ranked and defending Class A state champion Bellevue West to get out of a slow start on Monday night in the Boys A-1 district basketball championship, which was aired on ESPN Lincoln.

But two, 12-0 scoring runs in the second quarter helped create some space for the Thunderbirds in defeating Lincoln North Star 77-48 at the Thunderdome to capture the district title and the overall No. 1 spot in next week’s NSAA Boys State Basketball Tournament.

With North Star last leading 17-12 early in the second quarter, Bellevue West responded with a 12-0 run sparked by a three-pointer and a pair of free-throws from 6-7 senior Frankie Fidler. The Thunderbirds took control at 19-17 with five minutes left before halftime, of a steal and layup from junior guard Josiah Dotzler. Greg Brown then added a basket, then reserve forward Evan Inselman connected on a three-pointer that gave Bellevue West a 24-17 lead.

Josh Hilkemann, North Star’s 6-3 freshman guard, ended the drought by scoring a layup and after a Bellevue West basket, the Navigators then got a two-hand dunk from 6-8 sophomore center Brennon Clemmons, Jr., trailing 26-21. Another 12-0 run, sparked by a mid-range basket from Fidler and the 23-2 Thunderbirds led 38-24 at halftime.

Fidler led all scorers with 18 points, while Wisconsin recruit Chucky Hepburn finished with 17 and Greg Brown added 12 in the Bellevue West victory.

Hilkemann had 17 and 6-3 senior Kwat Abdelkarim added 11 points in the loss for North Star, who finishes the year 13-10.