BOYS BASKETBALL: Class B No. 4 Skutt Upsets No. 2 Norris 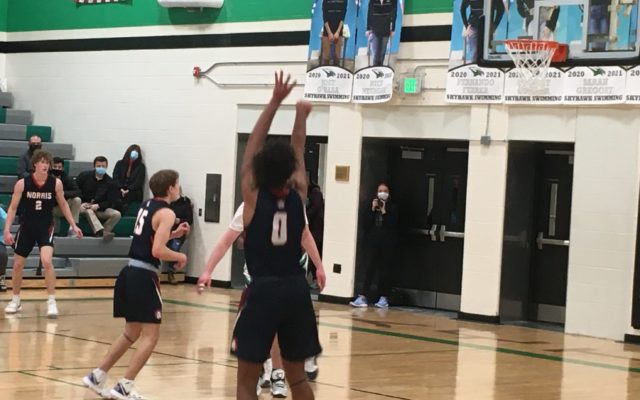 Norris center Trey Deveaux (0) attempts a three-point shot in the second half against Omaha Skutt on Tuesday night February 9, 2021. Teammates Cade Rice (15) and CJ Hood (2) move in toward the basket. (Jeff Motz/ESPN Lincoln)

OMAHA–(KLMS Feb. 9)–Defending Class B state champion and No. 4 Omaha Skutt Tuesday night got off to an impressive start and rallied back from an early third quarter deficit to beat Class B No. 2 Norris 66-58 in a boys basketball game heard on ESPN Lincoln.

The Skyhawks (13-4) jumped out to an 18-10 advantage with 1:28 left in the first quarter, sparked by back-to-back three-pointers from senior reserve guard Ben Hawk and a basket by JJ Ferrin.

The Titans reclaimed the lead briefly at the start of the third quarter, with a quick 6-0 run off baskets from Deveaux and 6-0 senior guard Dane Small gave Norris a 30-28 lead.  Skutt replied with a pair of three-pointers from Ferrin and Hawk and the Skyhawks took off to a 39-38 lead heading into the final quarter.

Skutt scored the first six points of the quarter to stretch the lead to 45-38, before pulling away.

Senior guard Charlie Fletcher led the Skyhawks with 12 points, while James Gninefou, Hawk and Ferrin each added 11 points in the victory.

Deveaux led all scorers with 22 points for Norris and Small added 15.