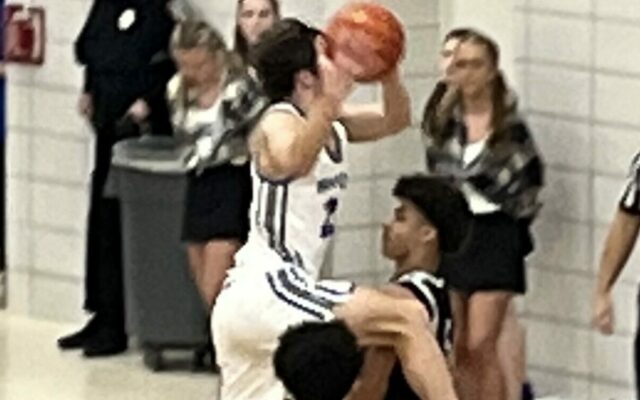 LINCOLN–(KFOR Jan. 17)–Carter Mick got into a rhythm of shooting the three-point shot Tuesday night.

The 6-2 Lincoln East junior guard helped spark a 14-2 scoring run during the first and second quarters by connecting on four of five three-point attempts in the span and wound up finishing with 25 points, as the Class A No. 7 Spartans defeated cross-town rival Lincoln Northeast 60-55, in a game heard on KFOR.

East (9-3) jumped out to a 17-9 lead early in the second quarter, partly due to the perimeter shooting from Mick, who had 15 points by halftime.  The Spartans led by five at the break and got a big third quarter boost when 6-3 senior forward Christian Melessa scored eight of his 12 points in the period that helped East to a 49-38 lead.

Northeast (9-6) began to chip away in the fourth quarter and got as close as 56-53 on a pair of free-throws from senior guard Jalen Lang.

The Spartans relied on late free-throws from Mick to seal the win.

Click the links below to hear the podcast of the game.