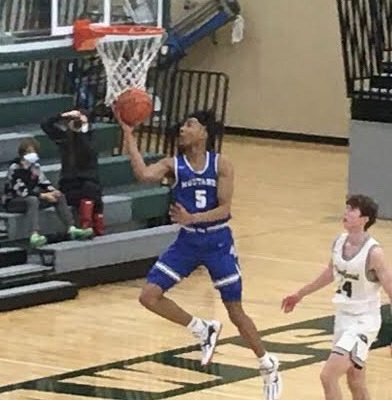 Millard North's Hunter Sallis (5) scores on a reverse layup against Lincoln Southwest in the third quarter of their game on Saturday, Feb. 6, 2021. Southwest's Tyler Sellentin is to the right. (Jeff Motz/KFOR Sports)

LINCOLN–(KFOR Feb. 6)–For about eight minutes on Saturday night, the No. 2 ranked Millard North boys basketball team was being tested by Lincoln Southwest, who had as much as a five-point lead.

But the Silver Hawks managed to awaken a sleeping giant in the second quarter, as the Mustangs went on a 25-9 run and never looked back in a 96-68 Millard North victory in a game heard on KFOR.

Southwest was up 19-14 with less than two minutes left in the first quarter, off a three-pointer from sophomore guard Rylan Smith, when Millard North set out on a 9-0 into the second quarter. Saint Thomas, a 6-7 senior forward, hit a three-pointer. That was followed by a Hunter Sallis steal and assist to Jasen Green for a basket just before the end of the period.

The Mustangs (19-1) regained control at 21-19 early in the second quarter, on a Sallis put back off a missed three-pointer from Thomas and on the next possession, Colin Monie scored off an offensive rebound following a missed shot by Green.

Southwest got as close as 25-24 off a Jared Bohrer three-pointer, but Sallis responded with a basket on the other end and Millard North started to pull away by finishing with a 19-3 run to end the first half with a 44-27 lead.

Both Sallis and Thomas combined to score 18 of Millard North’s 22, third-quarter points and expanded the lead to 66-44 entering the final quarter, where the Mustangs outscored the Silver Hawks 30-27. Sallis led all scorers with 29 points, while Green added 18 points and Thomas chipped in 17 points in the win.

Bohrer and 6-5 junior forward Ben Hunzeker each scored 16 points in the losing effort for Southwest.