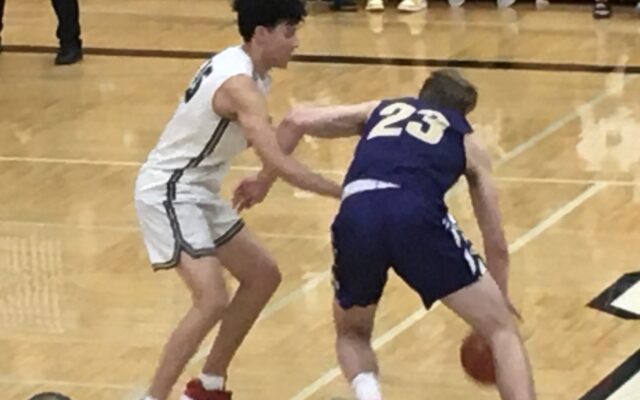 LINCOLN–(KFOR Feb. 28)–In their previous meeting Jan. 28, the Lincoln Northeast boys basketball team had an 11-point, fourth quarter lead fall through against Grand Island that resulted in a two-point loss.

The second meeting in a month on Monday night was different, as the Rockets handled the defensive pressure well and held on for a 47-37 victory over the Islanders in the Boys A6 District semifinal at the Ed Johnson Gym, in a game heard on KFOR.

Northeast, ranked No. 10 in Class A with an 18-6 record, will now play Creighton Prep in Wednesday’s 7pm district championship at Prep, which will be carried on KFOR and kfornow.com.

The Rockets early on, though, took advantage of Islander senior sensation and University of Virginia commit Isaac Traudt being out of the game, after injuring his right ankle.  The 6-9 Traudt came out midway through the first quarter and didn’t return until a few minutes into the third quarter.  Northeast managed to spread the scoring out, in the meantime.  Adonis Jones nailed a three-pointer to build up an eight-point lead in the second quarter and held on to a 20-13 halftime lead.

The Rockets continued to maintain a lead, even when Traudt returned into the Islander lineup midway through the third quarter.  Traudt scored seven of his 13 points in the period, with Grand Island trailing Northeast 31-22 entering the fourth quarter.

The Islanders got a boost in the final frame, when Andy Poss nailed a pair of three-pointers that pulled Grand Island to within five.  Jones responded with a three-pointer for Northeast to extend the lead and the Rockets pulled away from there.  Senior guard Zander Beard sank four three throws to help seal the win.

Porter Bazil and Christian Winn each scored nine points to lead Northeast. Poss led all scorers with 15 points for Grand Island, who finished the season at 10-13.

Click the links below to listen to the podcast of the game.