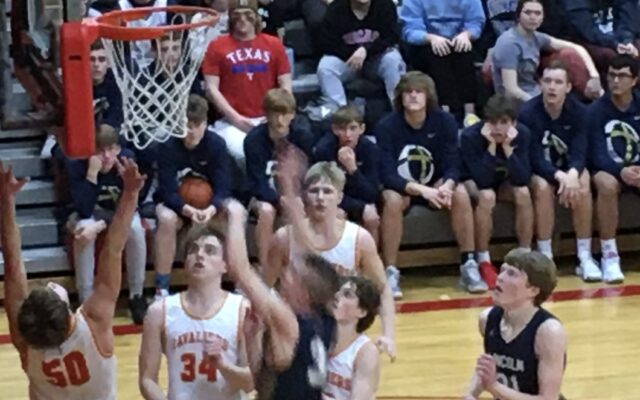 WAHOO–(KFOR Jan. 20)–Lincoln Lutheran for the third straight game hit Highway 77 for another boys basketball game not showing any signs of fatigue.

The Warriors counted on 20 points from 6-5 senior Jonny Puelz, nine of which came in the fourth quarter, to earn a 48-39 victory over Bishop Neumann Friday night, in a game heard on KFOR.

Lutheran (10-6) has won three-straight games, including a 69-35 win at David City Aquinas on Tuesday night and a 75-52 win at Fremont Bergan on Thursday.  The Warriors overcame a slow first quarter start before scoring nine-straight points and taking a 13-9 lead.  But as Neumann started to chip away at the Lutheran lead in the second quarter, the Warriors had an answer.

Puelz hit a three-pointer early on to make it a 16-9 advantage and as the Cavaliers cut the deficit to four, the Warriors got back-to-back three-point baskets from reserve forwrad Ethan Ringler and Lutheran led 22-19 at halftime.

The Warriors led 31-25 heading into the fourth quarter and led 37-33 before a pair of baskets from Ringler, then Puelz scored off a breakaway two-handed dunk,  and Logan DeBoer drove to the basket to score as part of an 8-0 run late that ultimately sealed the win.

Neumann, who fell to 7-7, was led by Luke Meis’ 14 points and Kanon Cada chipped in nine points for the Cavaliers.

Click the links below to hear the podcast of the games.