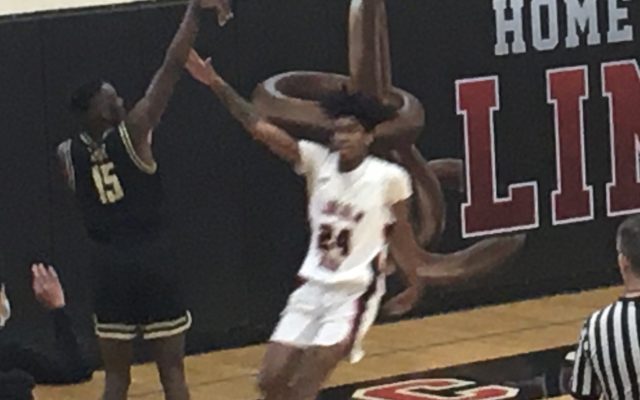 LINCOLN–(KFOR Feb. 12)–Lincoln Southeast wasted no time Friday night jumping out ahead of Lincoln High and not looking back.

The Knights sprinted out to a 9-0 start within the first 1:24 of the game and put the game out of reach midway through the first quarter to earn a 71-45 boys basketball victory over the Links at Earl Johnson Gym, in a game heard on KFOR.

A pair of baskets from 6-5 junior forward Jake Appleget, another from 6-6 senior forward Ajantae Hogan and a three-pointer from Corey Krueger put Knights up 9-0 with 6:36 left in the first quarter.  Appleget added two more baskets and 5-10 senior guard Sam Haire nailed a three-pointer, while Hogan hit one-of-two free-throws to put Southeast up 17-0 with less than four minutes remaining.

The Knights during that run also forced several Lincoln High turnovers, but the Links managed to get on the scoreboard with 2:17 left in the first off a basket from 6-5 sophomore center Collin Nick.  Southeast, though, outscored the Links 6-2 the rest of the period to take a 23-4 advantage.

Despite several missed shot attempts and turnovers, Lincoln High managed to score often in the second quarter, but was outscored 20-14 in the period and Southeast led at halftime 43-18.

Hogan led all scorers with 20 points for the Knights, while Appleget finished with 12 and joined the rest of the starters (Krueger, McGinness Schneider and Barrett France) on the bench following just a few minutes of playing time in the third quarter.  Southeast’s lead grew to as much as 34 at one point before taking a 64-34 advantage into the fourth quarter.

Sam Haire came off the bench to score 13 points for the Knights, before fouling out in the fourth quarter.  All the Southeast players that suited up and played scored, except France.  Southeast is back in action at home Tuesday night, when they host No. 7 Lincoln Pius X and a game that will be carried on KFOR.