BOYS BASKETBALL: Seniors Go Out With Win, As Bazil’s 28 Lifts Northeast Past Fremont 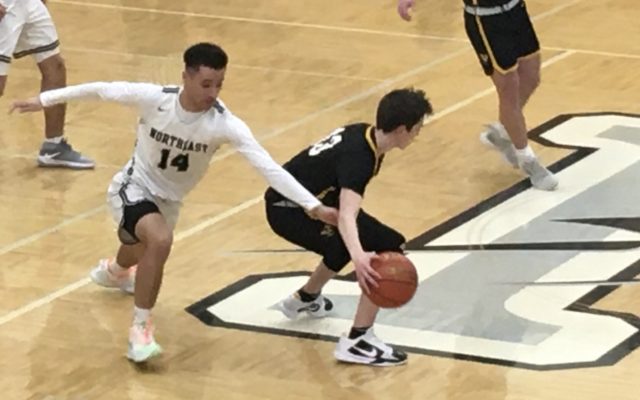 Lincoln Northeast's Zander Beard (14) attempts to steal the basketball from Fremont's Jadyn Cascio Jensen in the third quarter of the Rockets' 72-54 victory over the Tigers on Saturday, Feb. 20, 2021 at the Ed Johnson Gym. (Jeff Motz/KFOR Sports)

LINCOLN–(KFOR Feb. 20)–For the four seniors on the Lincoln Northeast boys basketball team, they’re hard work of trying to turn around a prominent program the past three seasons was recognized before Saturday night’s tip off at the Ed Johnson Gym against Fremont.

It showed early on the game and at a pivotal point in the third quarter, as the Class A No. 10 Rockets earned a 72-54 victory over the Tigers in a game heard on KFOR.

Senior guard Pierce Bazil led the 14-6 Rockets with 28 points, 19 of which came in the first half. Bazil poured in 14 points in the first quarter that gave Northeast a 21-7 lead. Bazil got help from fellow senior, 6-2 guard Zach Moerer, who scored 11 of his 13 points in the second quarter. Moerer hit a three to start the second eight minutes of play, then Fremont responded with a three-pointer from senior guard Carter Sintek.

Northeast’s 6-7 senior center Connor Renard, who scored 42 points in a win against Norfolk on Friday, converted on one of two free-throws, while 6-4 senior reserve forward and Southwest Minnesota State football commit Jeremiah Collier helped corral an offensive rebound and found Moerer, who cut down the lane to score. On the following possession, Moerer connected on a three-pointer to give the Rockets a 30-10 lead with 4:47 left in the first half.

Moerer hit his third and final three-point shot to boost the Rocket lead to 36-14 with 3:10 left in the second quarter, before Northeast jumped to a 44-23 advantage at halftime.

Fremont (4-17) came out strong to start the second half, as Sam Gifford and Carter Sintek combined for 16 of the team’s 19 points in the third quarter. Gifford hit a contested three-point shot right out of the locker room, then drove to the basket and scored off a pump fake on the next Tiger possession, then hit a long-range three-pointer within the first 1:30 of the second half.

As Northeast continued to hedge a head slowly, Fremont continued to whittle away at the Rocket lead. Dawson Glause nailed a three-pointer, then Gifford answered off a Northeast miss by driving to the basket to score to close the deficit down to 49-36, as part of a 13-5 run, with 4:53 left in the third.

The Tigers got as close as 51-42 with 3:34 remaining, after Sintek hit a three-pointer and later converted on a three-point play. Northeast later went back up by 11 heading into the fourth quarter after Bazil scored off a layup. The Rockets, from there, slowly pulled away to seal the win.

Sintek led Fremont with 19 points and Gifford added 13 in the loss.

To listen back to the game at anytime, visit our High School Sports On-Demand page.