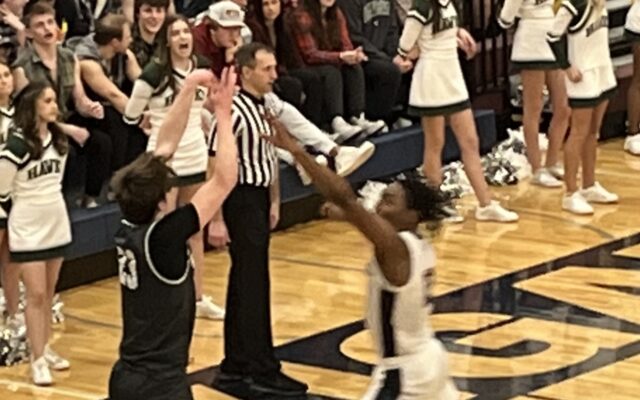 LINCOLN–(KFOR Jan. 13)–Considering it was Friday the 13th, it happened to be Rylan Smith’s lucky night.

The 6-1 Lincoln Southwest senior guard banked in a buzzer-beating three-point shot in overtime, moments after Lincoln North Star’s Brennon Clemmons’ basket to beat the shot clock, as the Silver Hawks came away with a 67-66 victory over the Navigators before a near capacity crowd Friday night at The Swamp, in a game heard on KFOR.

Smith’s winning shot caused the Southwest student section to go into a frenzy and storm the court in celebration, considering the Silver Hawks rallied back from an 11-point deficit to begin the fourth quarter.  Southwest rattled off 23 points in the final period regulation capped by sophomore guard Chuck Love’s three-point basket with 20 seconds remaining.

In the overtime period, Clemmons’ put back off a KG Gatwech missed three-pointer put the Gators ahead first.  After the Silver Hawks got one of two free throws from junior Karter Chamberlain, Clemmons would convert on a basket underneath the hoop but could not complete the three-point play with 2:30 to play in overtime.

Chamberlain would connect on a three-pointer two possessions later to tie the game at 64 with 1:20 remaining.  Following a time out with 36 seconds remaining to set up a play for the potential game-winning shot, North Star nearly turned the ball over when Clemmons came to the rescue and hit a 15-foot turn around fade away jump shot as the shot clock was about to expire.

A quick in-bounds pass to Smith with seven seconds left allowed him to dribble into the front court and pulled up at the top of the key and banked in the winning shot.

North Star (7-4) led after each quarter, including a 33-28 halftime lead before Southwest’s comeback late in the second half. Smith was held scoreless in the first half and dealt with early foul trouble before hitting his first basket in the third quarter for Southwest, who improved to 7-4. He finished with 16 points, while Love led the team with 19 points and Chamberlain along with 6-6 sophomore forward Braden Frager each added 10 points for the Silver Hawks.

Clemmons led all scorers with 22 points, while Sandlin’el added 18 and sophomore guard Lazerek Houston added 11 points in the loss for the Gators.

Click the links below to hear the podcast of the game.