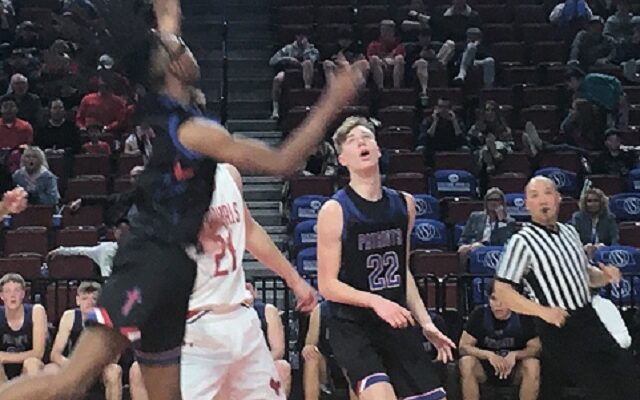 The Patriots jumped out to an early 17-9 lead and never looked back in their 64-48 triumph over St. Mary’s in the championship game of the 2022 NSAA Class D2 Boys State Basketball Tournament.

For Parkview Christian, the victory not only means their first state basketball championship but first championship in any sport in school history.  The Patriots also became the first Lincoln school to win a state boys basketball title since Lincoln Pius X won Class B in 2019.

Parkview Christian avenged their loss in the 2021 D2 finals to Falls City Sacred Heart in Thursday night’s semifinals by defeating the Irish 46-31.

Following the eight-point first quarter lead, the Patriots relied on their perimeter defense against St. Mary’s, causing the Cardinals to only shoot 33% from the field.

St. Mary’s, though, cut the deficit down to two, but Parkview got a basket right at the buzzer from Brayden Ulrich that gave the Patriots a 27-23 at halftime.  Parkview’s lead increased to 44-36 in the third quarter and then to nine, before the transition game and defense put things in to full throttle.

St. Mary’s (26-3) had Aidan Hedstrom finish with 18 points and Adam Everitt added 10 points in the loss.  It was the second time the Cardinals had played for a state title, last finishing runner-up in the 2012 Class D1 finals.