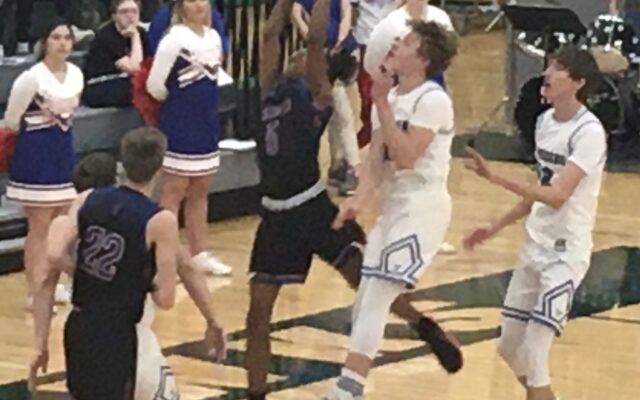 LINCOLN–(KFOR Mar. 8)–No. 6 seed Parkview Christian had four players in double-figures, led by Maurice Reide’s 15 points, to earn a 64-54 boys basketball victory over Hyannis in Tuesday night’s quarterfinal of the D2 bracket of the NSAA Boys State Basketball Tournament at Lincoln Southwest.

The Patriots (19-6) now have a rematch of last year’s Class D2 title game with Falls City Sacred Heart in Thursday’s 7:45pm semifinal at the Devaney Center, which you can hear on KFOR.  Sacred Heart has won the D2 state title the past two seasons.

Reide connected on four three-pointers in the game, two of which helped Parkview Christian to an 18-12 first quarter lead.  The Patriots pulled away to a 32-29 halftime lead.

Hyannis (23-4) started to surge in the third quarter, where 6-7 senior Liam Kostman scored 11 of his game-high 16 points in the frame.  But shots made by the Longhorns would not be enough, as the Patriots would find ways to score and force turnovers to build back a ten-point lead, 51-41, heading to fourth quarter.