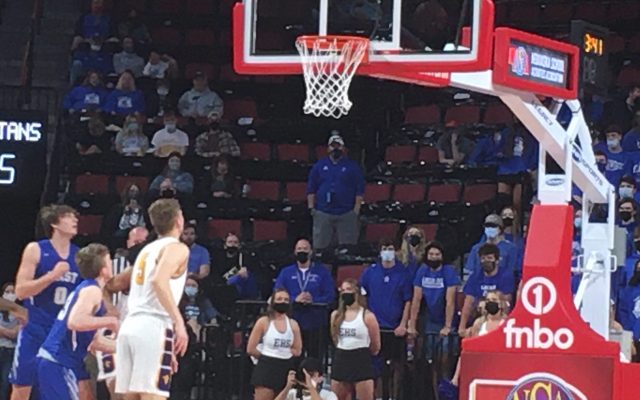 LINCOLN–(KFOR Mar. 9)–In Lincoln East’s first appearance in the NSAA Class A Boys State Basketball tournament since 2018, the Spartans were looking to pull off another upset.

East went up against No. 2 seed and defending Class A state champion Bellevue West on Tuesday night, managing to not let the game get too totally out of hand but fell short as the Thunderbirds earned a 55-47 victory at Pinnacle Bank Arena, in a game heard on KFOR.

The Spartans finish the season at 10-13 and are the only team to this point to hold Bellevue West to under 60 points in a game this season.  The Thunderbirds were averaging 85 points entering the State Tournament.  The last meeting between the two teams resulted in an 84-54 rout of the Spartans.

East, playing without head coach Jeff Campbell on the bench because he tested positive for COVID-19, had assistant coach Matt Wrenholt leading the team and the Spartans managed to come out and play hard for 32 minutes.

By spreading the floor and moving the ball, East found ways to attack the Bellevue West defense and score early.  The Spartans led twice, their last time was at 9-6 late in the first quarter before the Thunderbirds took control on back-to-back baskets and go up 10-9.  Bellevue West opened up a 28-16 halftime lead by outscoring East 18-7 in the second quarter.

The Thunderbirds (24-2) led by a much as 15 points in the third quarter and had a 55-39 advantage with less than 2:30 left in the game.  East got back-to-back three-pointers from Carter Glenn and Brayden McPhail.   Glenn missed a three that would have pulled the Spartans to within four.

Frankie Fidler, a 6-7 senior center and Nebraska-Omaha commit, led the Thunderbirds with 22 points, while Greg Brown added 12 and sophomore Josiah Dotzler added 10 points.  Bellevue West will play Creighton Prep Friday at 8:30pm in the Class A semifinal, which you can hear on ESPN Lincoln.