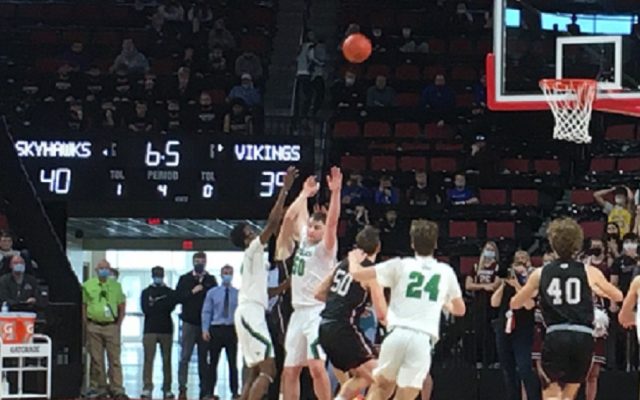 LINCOLN–(KLMS Mar. 10)–It’s been 26 years since Waverly had made it past the quarterfinals of the NSAA Class B boys state basketball tournament.   Andrew Heffelfinger’s mid-range shot with six seconds left rest-assured the Vikings would live to see another day in the tournament.

Waverly (16-6) now moves on to play Beatrice in Friday’s 4pm semifinal game, which will also be carried on ESPN Lincoln.  The Orangemen upset No. 3 seed Elkhorn Mt. Michael 49-39 in the other quarterfinal game on Wednesday.

The Vikings found themselves up 36-32 at the end of the third quarter, when Heffelfinger hit a three-pointer right before the buzzer.  But Skutt wouldn’t go away.

The SkyHawks (18-5) threw on a press in the fourth quarter, which helped in a rally.  Charlie Fletcher hit two free throws and Grant Dvorak scored off a rebound off a missed shot with 1:40 left in the game to give Skutt it’s final lead at 40-38.

Waverly junior guard Cole Murray hit one of two free-throws with 1:09 to play.  Skutt had an opportunity to space the lead, but J.J. Ferrin missed the front end of an one-and-one chance.  That set up what would be the game-winner for Waverly.

The Vikings led 9-7 after the first quarter and 23-22 at halftime.  Heffelfinger led all scorers with 14 points, while Fletcher and James Gninefou each had nine points to lead the SkyHawks.

Waverly is in their first semifinal since 1995.  They have not won a state basketball championship, since the Vikings were Class C in 1949.