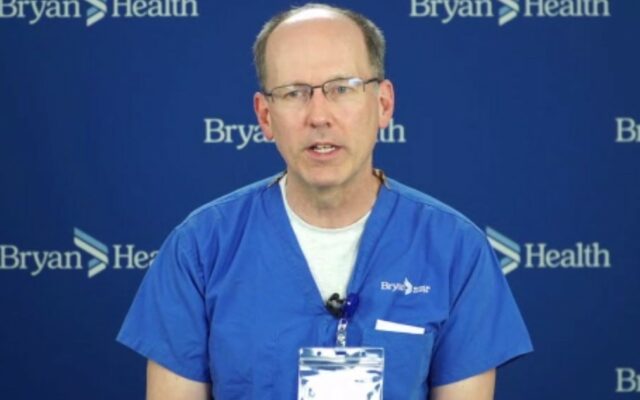 Lincoln, NE (May 23, 2022)  Getting a Covid 19 vaccination and two booster shots is still important, according to Bryan Health Physician Dr. Jim Nora. He said today that, after 6 weeks of rising Covid case numbers, the virus is still a threat; particularly to those who are not vaccinated.

Dr. Nora said that the vaccines have been proven to be safe, despite side effects suffered by some people.

Figures provided by Bryan Health and the Lincoln-Lancaster County Health Department show that Covid-19 case numbers were low, some days in single digits, until the beginning of April.  They have been rising steadily over the past six weeks.  Today’s report from the Health Department listed 75 new cases on Saturday, 32 on Sunday, and 30 today.

“Most authorities would say that it is unlikely that this particular epidemic will turn into the next Covid-19” he said.  “This particular virus is not as easily transmissible, and is more controllable from a public health standpoint.”

Monkey Pox, he said, is a lesser cousin of small pox.  Its symptoms include fever, headache, swollen lymph nodes, and pustules that can be as large as one half inch high.  Its visible rash and pustules, he says, look similar and a Doctor’s examination is needed to determine the diagnosis.  An outbreak usually lasts 2-3 weeks, rarely resulting in hospitalization.  Rather, he said, a doctor usually advises the patient to remain isolated at home until the rash disappears.