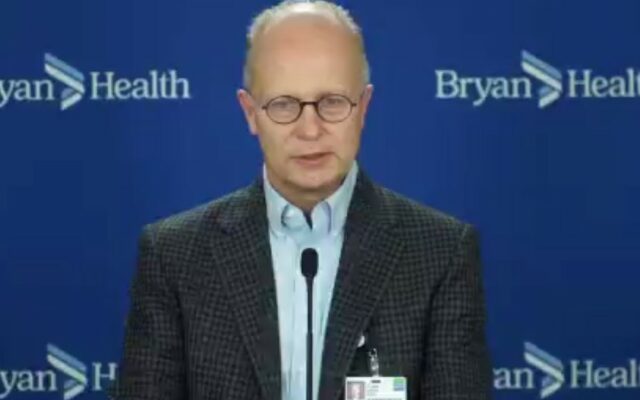 Lincoln, NE (November 2, 2022) Lincoln’s Bryan Hospitals have never been busier. During the peak of the Covid-19 outbreak they were caring for 530 to 550 patients at a time.

“In the past few weeks we’ve seen ever higher census, where we’re consistently 550 into the 580’s” according to Chief Medical Officer Dr. John Trapp.  “This is a considerable expansion of the Hospital capacity, a stretch on our workforce.”

Trapp said today that even higher numbers could be on the way with flu season, a rise in R-S-V cases, and two more variants of Covid 19 expected to hit this area in late November.

“We’re anticipating these waves probably hitting Nebraska in late November and through the month of December and maybe into early January.  These variants have resulted in increased hospitalizations and deaths in other countries and we anticipate that same risk for us.”

“We have expanded to hallway beds, so patients are still able to be evaluated, and certainly Emergency Room volumes are higher than ever we’ve seen in the past.”

The number of babies and infants hospitalized with R-S-V has been rising also recently.

“Last week we had 27 pediatric patients in a 17 bed pediatric floor, so we’ve had to expand that to some of our adult floors.”

Trapp said the best way to avoid serious illness and hospitalization from the viral infections going around right now is to get a flu shot, make sure you have the latest Covid booster, and practice good hygiene such as hand washing, covering coughs, and avoiding crowds of non family members.

Commenting on the outbreak of RSV and other bronchial infections, Pediatric Hospitalist Dr. Amy Pinkall said most children are infected in the first two years of life.  Older children and adults, she said, get typical cold symptoms such as runny noses, but the illness tends to strike infants harder, with fever, cough, and difficulty breathing.

The key to keeping infants and children healthy is not surprising, she said.

“Even if Uncle Tom says it’s just his allergies, maybe he should not come to the house until he’s got those cleared up, and then either wear your baby in a sling, wear a wrap or keep your baby in a carrier, because people are less likely to try to help you by carrying your baby or passing your baby around.”