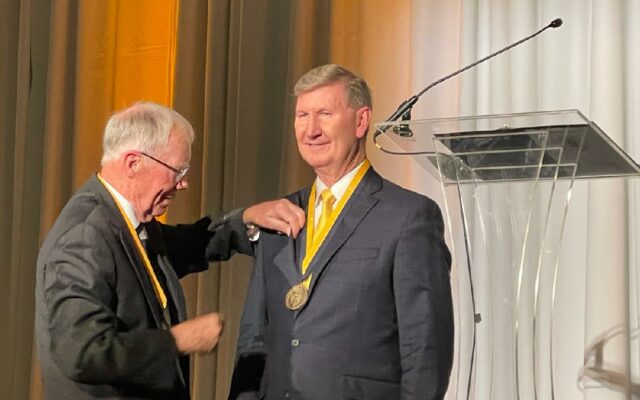 Carter, a retired Vice Admiral who graduated from the Naval Academy in 1981, was among five alumni honored this weekend in a ceremony in Annapolis. He became one of the youngest alumni ever to receive the Distinguished Graduate Award since its inception in 1998. Past recipients include the late U.S. Sen. John McCain, former Chairman of the Joint Chiefs of Staff Michael Mullen, former Commander of U.S. Strategic Command James Ellis, and Capt. Jim Lovell, the mission commander of Apollo 13.

Recipients must be nominated by a member of the U.S. Naval Academy Alumni Association and Foundation and are selected by a distinguished panel of alumni.

“This honor confirms that Ted Carter is a leader of the very highest caliber,” said NU Board of Regents Chairman Bob Phares of North Platte. “To have even been nominated is a big deal. To be selected and join a list of some of America’s great public servants is an extraordinary achievement. I am reminded yet again of how fortunate we are to have attracted President Carter to Nebraska to lead our university.”

“‘Humbled’ doesn’t begin to describe the emotions that Lynda and I are feeling,” Carter said. “Public service has been our life’s calling. In anything that we’ve done, we have tried our best to give back some small measure of the opportunities that have been given to us. We are grateful to the Naval Academy family, and to Nebraskans, whose support for members of the military is second to none and who have welcomed us so warmly over the past several years.”

After graduating from the Naval Academy, Carter served for 38 years as a Naval Flight Officer, amassing more than 6,300 flying hours and the most carrier-arrested landings in American history. He served as president of the Naval War College in Newport, R.I., and went on to become the Naval Academy’s 62nd superintendent from 2014 to 2019, the longest continuously serving superintendent in Annapolis by special request of the Secretary of the Navy and the Chief of Naval Operations.

Carter is a graduate of the Navy Fighter Weapons School (Top Gun) in Miramar, Calif. His military service includes serving as commander for the Carrier Strike Group Twelve, in which he commanded 20 ships, two nuclear-powered aircraft carriers and two carrier air wings that were deployed to Afghanistan and the Arabian Gulf.

He became president of the University of Nebraska System in 2020.