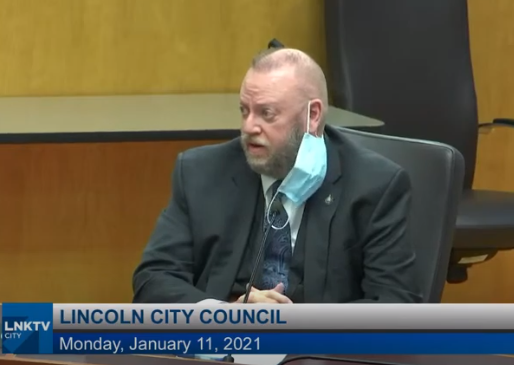 Lincoln, NE (January 11, 2021) The Lincoln City Council today rejected a resolution that would have declared the Covid-19 emergency over. The city has been in an emergency, declared by the mayor 10 months ago. Councilman Roy Christensen moved to end it.

“The Mayor has yet to use the emergency powers that were granted then.  The DHM’s (Directed Health Measures) in place and will continue to be in place, frankly, are unaffected by this.”  Christensen explained that he wasn’t trying to do away with the State of Emergency.

“Part of what my next proposal would be is to have 60 to 90 day extensions of the emergency powers.  That would allow us regular reviews of what the situation is, how those emergency powers are being used, and what an end date would look like.”

Christensen’s resolution drew sharp responses from several fellow Council members.  Jayne Raybould said “what alternative universe could you possibly be living in?”  Raybould cited a number of statistics about the increasing number of cases of Covid-19, and added that this was the first Christmas she had been unable to spend time with her children or grandchildren because of the continuing danger of travel.

Council Member James Michael Bowers mentioned several of his constituents who had passed away from Covid by name.  He also said the end to the emergency would leave First Responders without adequate protection.

Council Member Sandra Washington said, because of her career with a Federal Agency, the she believed ending the State of Emergency would make the City ineligible for millions of dollars in Federal funding to fight the pandemic.