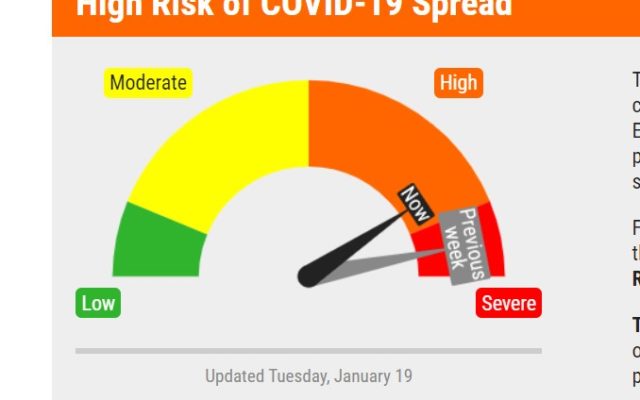 Lincoln, NE (January 19, 2021) Lincoln’s Covid 19 Risk Dial was lowered from “Red” to “Elevated Orange” Tuesday, even as the City-County Health Department announced that four more people had died from the Corona Virus, and 235 new cases had been confirmed in the past 24 hours.

Health Director Pat Lopez said right now Lincoln’s hospitals continue working on Phase 1-A, the vaccination of health care workers and residents of long term care facilities.  The next step, Phase 1-B, will include people with underlying health conditions that increase their risk of severe illness, essential workers, and people over age 65.  That phase, according to Lopez, will open as soon as vaccines become available.

Lopez announced a new online vaccine registration tool that will launch at 8:00 A.M. Wednesday morning.  The registration will ask how the registrant wants to be notified.  In turn, she says, each person will be notified when they are eligible for an appointment.  It will be found as part of the City’s Covid-19 website, http://covid19.lincoln.ne.gov/

Because of the lowering of the Risk Dial, several changes to the Directed Health Measure (DHM) will go into effect Friday, January 22 and will be in effect through February 21:

Nebraska Among States Showing Increase In Holiday Spending During The Pandemic