Covid Dial Moves Down To Yellow 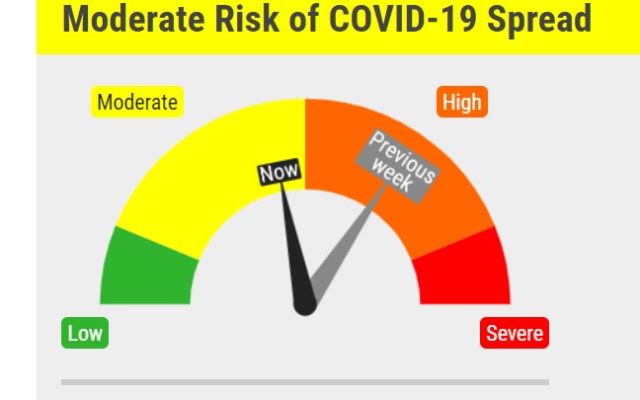 Lincoln, NE (February 9, 2021)  Lincoln’s Covid 19 Risk Dial moved down to the Yellow or “Moderate Risk” category today.  After ten weeks in the Red and two in the orange, the dial’s movement represented another drop in the risk level described by Health Professionals.  “Think of the Yellow like a streetlight:  reminding you to be cautious” said Mayor Leirion Gaylor Baird as she announced the change.

38,703 doses had been administered in Lancaster County as of Tuesday afternoon.  Just over 11,000 people had received their second vaccination.  “We encourage everyone to receive the vaccine just as soon as it’s available to them” the Mayor said.  She added that the health department will receive 25% more vaccine this week.   The increased allotment will lead to two more mass vaccination clinics this coming weekend…Friday and Saturday…at the Pinnacle Bank Arena.  Both will be reserved for people 75 and over.

The dial has not been in yellow since late August. Before moving to orange in mid-January, the dial had been red for 10 consecutive weeks.  On the color-coded dial, red represents the highest risk of COVID-19 spread, and green represents the lowest risk. The dial is updated every Tuesday.

Several changes to the Directed Health Measure (DHM) will go into effect Friday, February 12 and will be in effect through March 12: