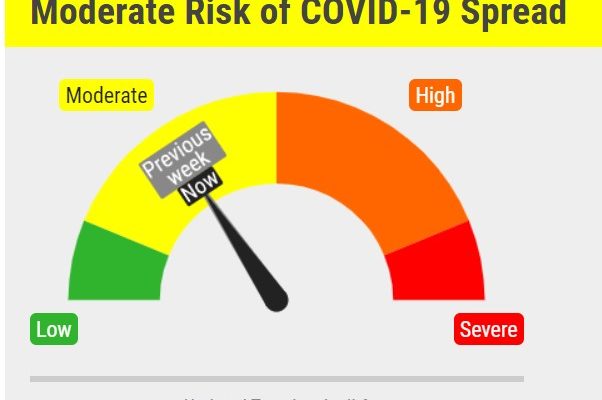 Lincoln, NE (April 6, 2021) Mayor Leirion Gaylor Baird and the Lincoln-Lancaster County Health Department (LLCHD) today announced that the COVID-19 Risk Dial will remain in mid-yellow for an eighth consecutive week as key indicators continue to remain steady.  The yellow position on the dial means that the risk of the virus spreading in the community is moderate.  On the color-coded dial, red represents the highest risk of COVID-19 spread, and green represents the lowest risk. The dial is updated every Tuesday.

The Mayor and Health Director Pat Lopez each warned that it’s crucial for all residents to continue wearing masks and keeping social distance.  Both pointed to Covid variants spreading in other states, saying that 7 variant cases have been confirmed in Lincoln.

“The 24 local patients reported yesterday is the highest since March 6th, when 26 local residents were hospitalized.  Today, 22 of the 27 hospitalized patients are from Lancaster County.”

Lopez also said, however, that the combined effect of social distancing and masking, Directed Health Measures, and the increase in vaccinations are working to cut down the worst effects of the pandemic.

“The number of covid 19 deaths in our community has decreased from 45 in January to 23 in February to 6 last month.  We saw no reported deaths of long-term care facility residents in March.”

This week’s position of the Risk Dial, in the middle of the Yellow zone, is based on multiple local indicators and information from the previous three weeks, according to Lopez:

Because of concern over the variants and the increasing number of new cases and hospitalizations, the current Directed Health Measure has been extended through April 23, when the majority of those age 65 and up will be fully vaccinated.