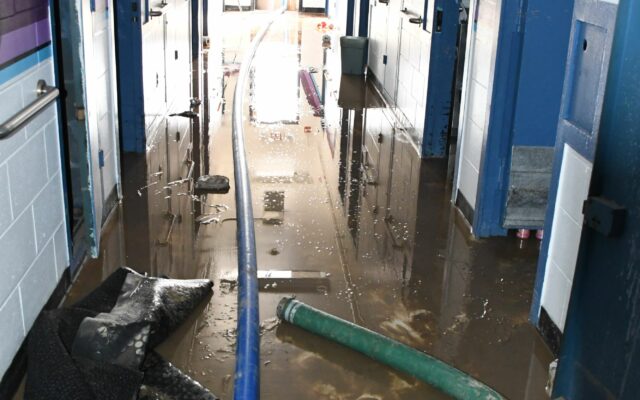 Looking down hallway of flooded housing unit. Blue pipe was used to pump out water. (Furnished by Nebraska Department Of Corrections)

November 11, 2022 (Lincoln, Neb.) – The evacuation of a housing unit yesterday at the Nebraska State Penitentiary (NSP) resulted from a burst pipe. One-hundred and thirty-four men were moved. The majority were relocated to a new housing unit at the Reception and Treatment Center (RTC). Alternative housing was also identified within NSP and RTC.

Nate Bornemeier, engineering administrator at the Nebraska Department of Correctional Services (NDCS) said the breach was detected in a buried pipe about 10 to 15 feet from the exterior of the housing unit. Once the pipe was dug up and inspected, additional holes were noted.

“The pipes are made of cast iron and they are rotting out on the bottom. These are the same types of leaks that we’ve had over the years,” noted Bornemeier. Structural, electrical and mechanical engineers with a local firm came to the site today. “Based on preliminary estimates, this single incident could take the entire housing unit offline for the next one to two years. That’s how long it could  take to go through all the steps to make the building suitable for occupation again.”

The location of the leak caused flooding in the housing unit’s mechanical room which operates door controls, heating and cooling systems, steam, fire protection,  air handlers, and the IT system for camera security. The water leak also carried a considerable amount of mud into the mechanical room and onto the floor of the housing unit.

“Water reached nine feet in the mechanical room itself,” said Bornemeier. “The mud left behind is at least two and a half feet high. We will start cleaning that out, but obviously, anytime you have a water intrusion, you worry about things like mold growth. There is also the likelihood of foundation issues underneath the building.”

The building housed men assigned to medium and maximum security. The population is made up of seniors and those who require medical accommodations. Currently, a new housing unit at RTC is being utilized for the displaced population. The unit is one that was slated to open in the coming weeks for a different group of maximum security inmates.

“This will delay that plan, most definitely,” explained  Deputy Director of Prisons Robert Madsen. “Based on the initial assessment, we know that the clean-up of the flooded housing unit will be considerable. In addition to bringing in experienced cleaning crews, we will need to undertake repairs and building inspections before that space can be occupied again. That means taking 140 beds offline for a long period of time.”

Other housing units on the NSP campus are not currently affected by the pipe leak. The entire facility is expected to resume normal operations later today, with the exception of inmate visits. The visitation program will be closed for everyone through the weekend.

Staff members continue to address the needs of inmates who have been displaced. “That includes getting their personal property to them and ensuring that those who need medications and other accommodations are assisted,” said Madsen