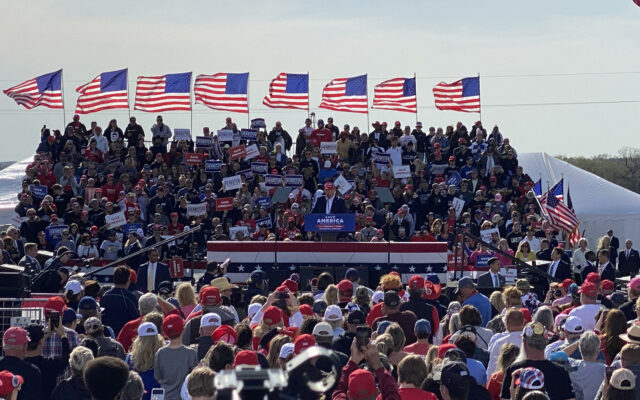 Donald Trump speaks at the "Save America" Rally in Greenwood, NE on May 1st, 2022. (Photo by Elijah Herbel/KFOR)

Donald Trump’s speech, which lasted more than 90 minutes, at times sounded more like a campaign speech for the 2024 Presidential Election than an endorsement for Charles Herbster, though he did put his support behind Herbster to be Nebraska’s next governor.

“Charles is a fine man, and he’s innocent of these despicable charges,” Trump said.

Herbster himself avoided discussing the allegations, instead using his 25 minutes on stage to reiterate the main tenets of his campaign, including cutting taxes, removing critical race theory from schools, parent choice for education, supporting law enforcement, and a hardline stance against illegal immigration and drug trafficking.

Though official attendance numbers have not been released, it was my estimation that somewhere between 2,500 and 3,500 people were in attendance for the rally.