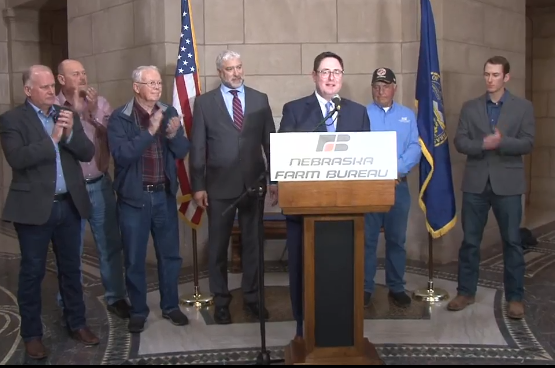 LINCOLN, NEB. (April 5, 2022) – State Sen. Mike Flood has been endorsed by the Nebraska Farm Bureau Political Action Committee (NEFB-PAC). Flood is seeking to serve the First Congressional District in the U.S. House of Representatives. Based on the results of Nebraska Farm Bureau’s grassroots selection process, which involves gathering input from local County Farm Bureaus across the state, Flood demonstrates his understanding of agriculture and its impact on our economy, according to Sherry Vinton, chair of the NEFB-PAC.

“It is clear our members believe Mike Flood is the right person to represent the First Congressional District. We are proud to offer him our endorsement and support as he seeks to represent Nebraskans in Congress,” said Vinton.

The NEFB-PAC endorsements are based on candidate’s positions on agriculture and rural issues and recommendations from district evaluation committees.

“Mike has a vast amount of experience serving as a current state senator and serving from 2005 to 2013, in which he also served as Speaker of the Legislature. This makes him a great candidate to represent Nebraska in the First Congressional District. Mike is a businessman and understands the important role agriculture plays in Nebraska’s economy,” said Vinton.

Flood has been a strong advocate for Farm Bureau priorities such as tax reform, working to expand broadband and e-connectivity, as well as growing opportunities for economic development in rural areas.

“Mike will work every day for Nebraska families to protect their freedoms, grow our economy, cut taxes, and reduce federal overreach. He will fight to make sure Congress reflects our Nebraska values,” said Vinton.

Flood’s proven leadership as a former Speaker of the Legislature and current state senator makes him well qualified to serve on the national stage representing Nebraska’s First Congressional District.

“We’re pleased to support Mike as he seeks to serve those in Nebraska’s First Congressional District. We look forward to working with him for the betterment of Nebraska and the nation,” said Vinton.