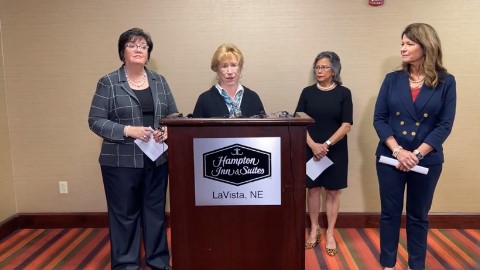 Herbster denies claims made by at least 8 women that he inappropriately touched them at political events. Only one of the eight, State Senator Julie Slama of Sterling, has been publicly identified.  Herbster filed suit against her last week, and Slama answered and filed a counter claim Monday.

In a joint statement, the senators said, “Herbster is trying to wield the judicial system as a weapon to silence his victims and others who have witnessed his misconduct”.

Herbster spokesman Emily Novotny issued a statement, calling it “another attempt by the Pillen Campaign and Governor Ricketts to sling mud at Herbster before the May Primary. She called it “shameful that they woulduse serious matters to push a political smear campaign.”

Two of the Senators, Suzanne Geist and Joni Albrecht, said they have received letters from Herbster’s Attorney demanding that they preserve all electronic records, such as e-mails, that refer to or pertain to the case.