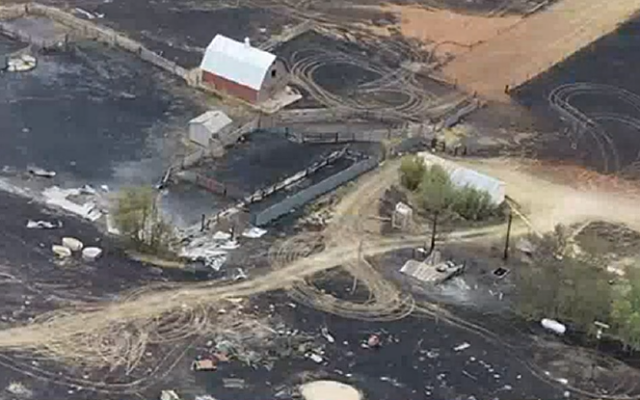 Gering, NE -10/11 News- (August 3, 2022)  The wildfire in the Scottsbluff area is estimated to be 50% contained as of Tuesday. This week, the Nebraska National Guard deployed soldiers and helicopters to help battle the blaze.

10/11 NOW spoke with a chief warrant officer with the National Guard who’s with his crew in the panhandle, helping to put out the Carter Canyon fire.

In total, there are nine soldiers and two guard helicopters assisting local agencies there. Chief Warrant Officer 4 Thomas Powell said he and his crew were told Sunday they were being called to help with wildfire efforts. Monday night, three more soldiers and a second helicopter were deployed.

“The first couple days that we were here there were a lot of areas that were out of control and we had to contain those areas,” Powell said. “We’re seeing a lot of trees and little valleys of tight ravines within the bluffs that are on fire we’re seeing a lot of jump out embers burning up grass pastures.” Powell said the National Guard is working alongside the Nebraska Forrest Service and rural fire departments.

“As we work with these rural firefighters and the national forest service we build a relationship and it’s always good to work with these guys and to be able to deploy our assets to help our neighbors all across the state,” Powell said.

According to the Nebraska Forrest Service, the fire, which started Saturday, has reached a size of about 15,630 acres. It’s knocked out power, prompted evacuations, destroyed a few homes and damaged others. As of Tuesday, residents are still urged to stay out of the area.

“Assisting in some wildfire operations going on just to the south and west of Gering, Neb. and it was a wildfire caused by lightning and quickly spread with dry grass and winds,” Powell said. The guard is providing crucial helicopter water bucket support.

“As far as what we’re being told with all the ground support in the area containment is going very well,” Powell said. “A lot of the interior is still burning however all of the boundaries around the fire are well contained and continue to be maintained that way.”

Powell said he anticipates the guard will leave the area by the end of the week.