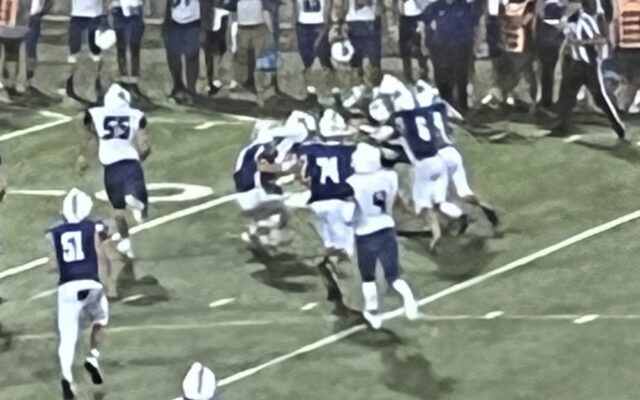 LINCOLN–(KFOR Aug. 25)–It came down to a fumble recovery for the No. 10 Kearney Bearcats to come away with their first win of the football season Thursday night against Lincoln East.

The Bearcats (1-0) recovered a fumble at their own 40-yard line from Spartan receiver Dash Bauman with 2:46 to play in the game and escaped Lincoln with a 14-6 victory at Seacrest Field in a game heard on KFOR. The Spartans also fumbled on the previous drive at the Bearcat 30-yard line.

Penalties, meanwhile, hurt East the entire night on offense, committing nine penalties for 50 yards. Neither team scored until 2:23 remaining in the second quarter, when Zander Reuling caught a five-yard pass in the end zone to give Kearney a 7-0 lead.

East (0-1) capitalized on a run play that saw Dash Bauman sprint 65-yards for a touchdown, but the point after was blocked and the Spartans trailed 7-6 with 8:51 left in the third quarter.

Kearney then managed to extend their lead, when Ethan Kowalek took off for a 69-yard touchdown run with 9:50 left in the game for what would be the final score.

East’s quarterbacks, senior Harrison Biester and sophomore Jeter Worthley, split time running the offense. Biester was 4-of-15 passing for 45 yards and an interception at the end of the first half. Worthley was 15-of-29 for 138 yards.