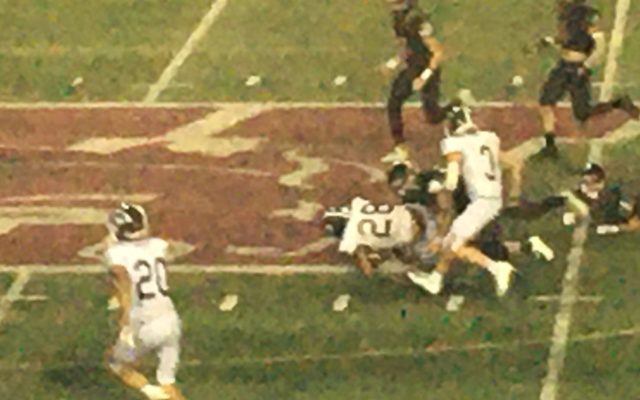 HASTINGS–(KFOR Aug. 20)–Down by two touchdowns in the first half and struggling to execute on offense looked like things were in doubt for the Lincoln North Star football team.

But an interception returned for a touchdown and a dominant second half turned things around for the Navigators, as they defeated Hastings 23-14 Friday night at Hastings College’s Lloyd Wilson Field, in the high school football season opener heard on KFOR.

Hastings had a 14-0 lead with just under three minutes remaining in the first half, when North Star’s Caden Steiger intercepted a Johnny Whyrick pass and returned it 85 yards for a touchdown.  The two-point conversion failed, but the Gators got on the board and trailed 14-6 at halftime.

Facing new life in the second half, it took off about 3:30 left the third quarter for North Star, when Barrett Goff raced for a 66-yard touchdown run to tie the game at 14.

The Gators (1-0) capitalized on a fumble recovery and settled for a 36-yard field goal from Nick Rorabaugh with 10:23 remaining in the game to take the lead, 17-14.  After forcing Hastings to punt, North Star put together a seven-minute, 68-yard drive that was capped on a three-yard touchdown run from sophomore running back Daniel Johnson to seal the win with 2:06 to play.

Hastings (0-1) got on the board late in the first quarter when Whyrick threw a 20-yard touchdown pass to Beau Dreher.  About a minute later, Dreher intercepted a Zach Fredenburg pass and returned it 46-yards for a touchdown to give the Tigers a 14-0 lead entering the second quarter.