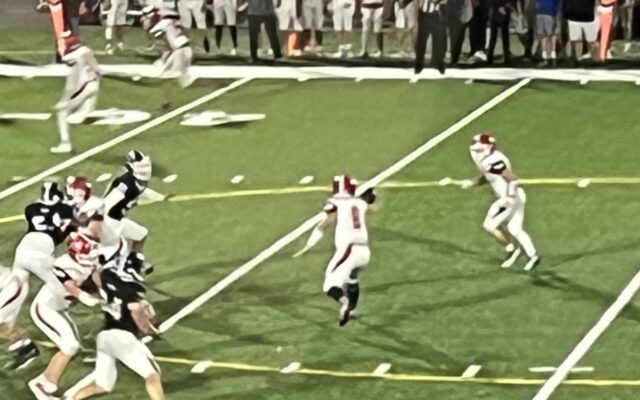 The Patriots struck first and after the Gators responded in the second quarter, Millard South sprinted for 21 unanswered points to earn a 49-10 victory over North Star in a game heard on ESPN Lincoln.

Lance Rucker caught a 15-yard touchdown pass from quarterback Cam Kozeal with just over six minutes remaining in the first quarter to put the Patriots ahead. North Star managed to put together a drive at the end of the first quarter but a field goal attempt from 21-yards out failed.

The Gators managed to bounce back with just 8 minutes left in the second quarter, with quarterback DJ Athouris connecting with Dylan Hallett on an 8-yard touchdown pass. On the ensuing kickoff, Millard South’s Gavin Nunnally returned the ball 84-yards for a touchdown to give the Patriots a 14-7 advantage.

After a North Star drive stalled, Millard south struck again. Kozeal found receiver Grant Renken on a 29-yard touchdown pass with 6:16 to play before halftime. The Patriots defense continued to stymie the Gators’ offense on some blitzes by pursuing the pocket and disrupting Athouris trying to throw passes.

The Patriots capitalized with a 9-yard touchdown run by Kozeal to cap a 74-yard drive just before the end of the first half for a 28-7 lead.

North Star started the second half with the ball, but was forced to punt and the ball ended up at the Gator 46-yard line. Millard South capitalized with a 33-yard touchdown pass from Kozeal to Renken. Then Nolan Feller intercepted an Athouris pass at the North Star 19-yard line. That would soon set up a 3-yard touchdown run from Kozeal and the Patriots led 42-10 with just over seven minutes remaining in the third quarter.

Renken caught his third touchdown pass of the night that put the game away with 9:06 left in the game.