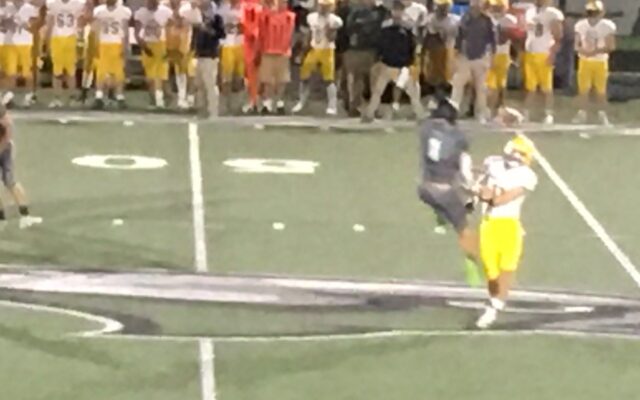 The SkyHawks capitalized with big plays early on and managed to utilize their defense to stop No. 8 Lincoln Pius X on a few drives, even preventing the Thunderbolts from scoring in the second quarter en route to a 13-0 victory at Moylan Field in a game heard on KFOR.

Skutt (4-2) last played Sept. 16, where they fell 34-13 to No. 5 Elkhorn, but since Omaha Buena Vista forfeited their season the SkyHawks got the automatic win for their scheduled Sept. 23 game.

After a couple of big running plays courtesy of running back Wyatt Archer, Skutt capitalized when junior quarterback Bennett Turman found senior wide-receiver Joe Connolly on an 18-yard touchdown pass.  While the point after attempt was blocked by Pius X defender Jack Schafers, the SkyHawks took a 6-0 lead with 9:47 left in the first quarter.

Pius X (3-3) went with a ground attack from running back Matt Bohy and a few swing passes to receiver Cole Skrupa to move the ball into SkyHawk territory.  Then Thunderbolt quarterback Kolbe Volkmer’s pass attempt to Nate Schauer was complete around the Skutt 15-yard line before the ball was stripped out of his hands before he crossed the goal line and Skutt recovered the fumble for a touch back.

Two plays later, running back Maccoy Holtam scored on a 74-yard run to give Skutt a 13-0 lead with 8:47 left to go before the end of the first half.

The SkyHawks added a 37-yard field goal from Morgan Finkenbinder with 13 second left before halftime and Skutt’s lead increased to 16-0.

Pius X capitalized on the opening drive of the second half, capped off on a 34-yard touchdown run from Matt Bohy and a two-point conversion was completed to Schauer put the Thunderbolts on the scoreboard 16-8.

Skutt then answered with 2:28 left in the game on a 20-yard touchdown run from Holtam.

Pius X then put together a quick drive with less than two minutes remaining and converted on a couple of pass plays to Bohy and Cole Skrupa.  A roughing the passer penalty on Skutt gave the Thunderbolts the ball at the SkyHawk two-yard line.  Holtam then tipped another Volkmer pass and intercepted the ball to seal the Skutt victory.