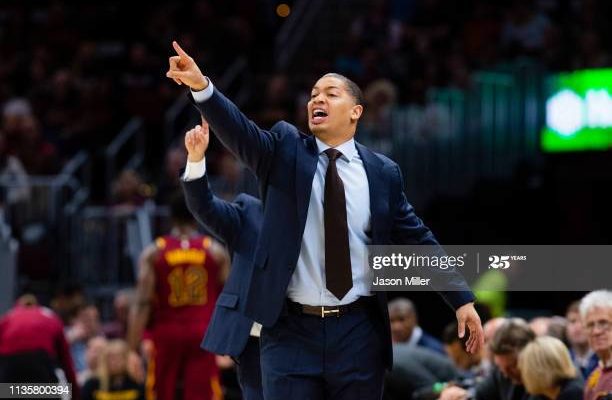 Tyronn Lue, former head coach of the Cleveland Cavaliers, yells to his team during the first half against the Indiana Pacers at Quicken Loans Arena on October 27, 2018 in Cleveland, Ohio. (Photo by Jason Miller/Getty Images)

The only Husker to win NBA titles as a player and head coach, Lue was an assistant coach for the Clippers last season.

Lue, who also was on the Clippers staff during the 2013-14 season, returns to the lead chair, as he previously spent parts of four seasons with the Cleveland Cavaliers (2015-16 to 2018-19). Lue posted a 128-83 mark in the regular season and went 41-20 in three
playoff appearances, guiding the Cavs to three straight NBA Finals appearances from 2016 to 2018. He guided Cleveland to its first
NBA title in franchise history in his first season as head coach in 2016. That year, the Cavs become the first NBA team to overcome a 3-1 deficit in the finals in topping a Golden State Warriors team that won an NBA-record 73 games that season. Lue became only the third NBA coach to win a title after taking over a team in midseason, joining Pat Riley and Paul Westhead.

Cleveland’s 2016 title marked the third for Lue, as he won a pair of titles with the Los Angeles Lakers in 2000 and 2001. Lue played for 11 seasons with seven teams as a player before moving into the coaching ranks. He had served as an assistant coach with the Boston Celtics (2001-13) and the Clippers (2013-14) before becoming the Cavs’ Associate Head Coach before the 2014-15 season.

As a Husker, Lue was a standout during his playing career from 1995 to 1998. A 2013 inductee into the Nebraska Basketball Hall of Fame, he became just the fourth player in school history to have his number retired when the No. 10 was honored in February of
2017.

A first-round draft pick in 1998, Lue ranks among the school leaders in assists (432, fourth), steals (154, seventh) and points (1,577, ninth) despite playing only three seasons at Nebraska. The point guard from Mexico, Mo., helped the Huskers to three
straight postseason appearances in his career, including an NCAA berth in 1998. That season, he averaged 21.2 ppg, 4.8 apg and 4.3 rpg in 2017-18 en route to earning first-team All-Big Ten honors.