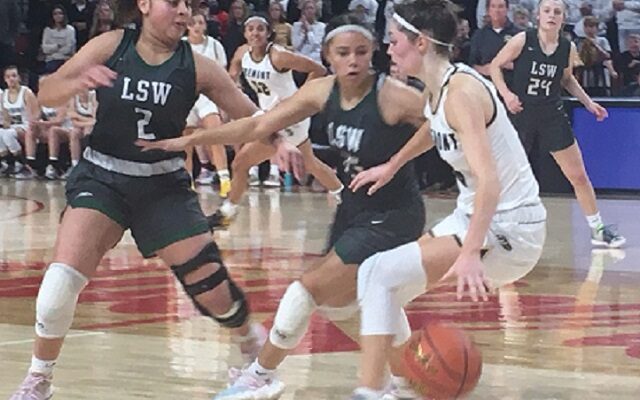 The Tigers relied on back-court pressure and used to a fourth-quarter run to earn a 37-32 victory over Lincoln Southwest to win the 2022 NSAA Girls Class A State Basketball Championship at Pinnacle Bank Arena, in a game heard on KFOR.

Fremont (27-2) became the first non-Omaha or Lincoln team to win the girls Class A basketball title in 40 years, since Kearney beat Lincoln Northeast 43-42 in 1982.

The Tigers trailed 26-24 after the third quarter and 30-24 early in the fourth quarter, when they pulled off a 13-2 run to finish the game and defeat Southwest.

The pressure from the Tigers also limited  Southwest’s offensive threats in Kennadi Williams and Freddie Wallace below their double-digit scoring averages.  Williams, a sophomore, scored only six points and Wallace finished with nine points before fouling out in the fourth quarter in her final game for the Silver Hawks, who ended the year 21-6.

Fremont shot 4-of-17 from three-point range for 23%, while Southwest missed all nine attempts from behind the arc.  The Tigers shot 82% from the free-throw line, making 9-of-11 attempts.  The Silver Hawks made 2-of-4 shots for 50% from the line.