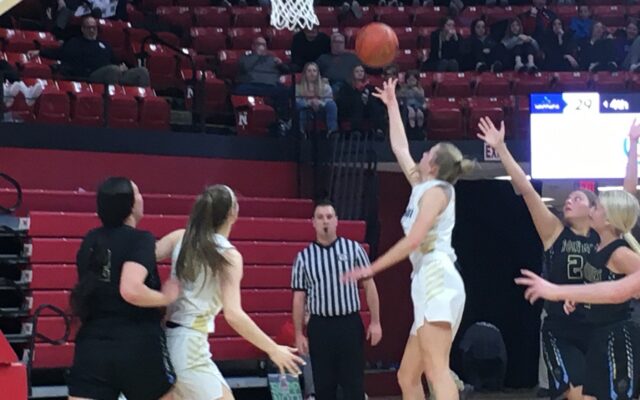 LINCOLN–(KLMS Mar. 7)–A late comeback by the Class C1 top-seeded Lincoln Lutheran girls basketball team swayed the momentum back to the Warriors and gave them a 33-32 victory in the C1 quarter finals of the NSAA Girls State Basketball Tournament Monday morning, in a game heard on ESPN Lincoln.

Lutheran’s 6-3 center Katelynn Oxley scored 10 of her game-high 17 points in the second half, including the go-ahead basket from inside with 47 seconds to play.

BRLD had several chances to score in the final 43 seconds of the game, but a baseline shot from Addison James went over the rim and the Warriors got the back with less than five seconds remaining to run out the clock and hold on for the victory.

Jordan Snyder led the 19-7 Wolverines in the loss with 11 points.  BRLD rallied back from a 6-2 first quarter deficit and took control in the second quarter by outscoring Lutheran 13-5 to go up 15-11 at halftime.  The Wolverines built up a nine-point lead, 20-11 in the third quarter, before the Warriors surged back behind a three-pointer from sophomore guard Jenna Luebbe and a basket from senior guard Shanae Bergt to trail 22-16 heading into the final quarter.

Luebbe added 10 points in the Warrior victory, including two three-pointers in the second half.  Bergt scored six points, including a layup with 1:30 to play that pulled the Warriors to within one of the Wolverines.

Lutheran will play in the C1 Semifinals at Pinnacle Bank Arena Wednesday at 9am against the winner between Broken Bow and Gothenburg.