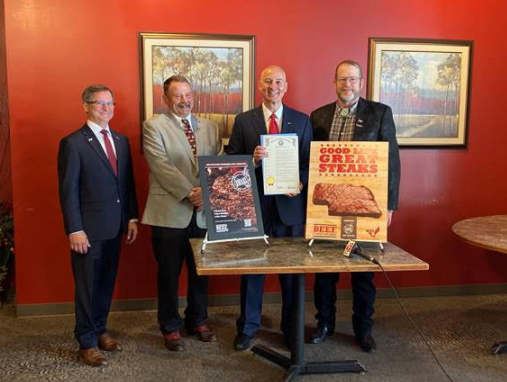 “Nebraska has long been known as the Beef State,” said Gov. Ricketts.  “Our cattle industry grows Nebraska by generating over $10 billion in cash receipts each year.  The new Beef Passport program gives Nebraskans the opportunity to support our ranchers by dining on delicious cuts of Nebraska beef.”

Through the Beef Passport program, Nebraskans can qualify for prize drawings by dining at 41 participating restaurants across the state that serve premium Nebraska beef.  Diners will receive a stamp on their passport for each restaurant they visit.  Stamps can be collected now through September 7, 2021.  To order a passport, see a list of participating restaurants, and get information on program rules and prizes, go to www.goodlifegreatsteaks.org.

“The beef community is the heart of Nebraska,” said William H. Rhea III, President of the Nebraska Cattlemen.  “With a continued focus on conservation and care, Nebraska farmers and ranchers are laser focused on enriching the land and caring for their animals.  The Beef State is an unmatched leader in delivering high-quality beef to those who love it, with the best people in the business each step along the way.  On behalf of Nebraska Cattlemen members, we thank Governor Ricketts for once again declaring May as ‘Beef Month’ and hope everyone celebrates with beef today—and every day.”

Nebraska ranks first in the nation for commercial cattle slaughter, second for beef exports, and second for all cattle on feed.  In 2019, beef was Nebraska’s number two agricultural export behind soybeans.  Nebraska has 22 million acres of rangeland and pastureland, about half of which are in the Sandhills.