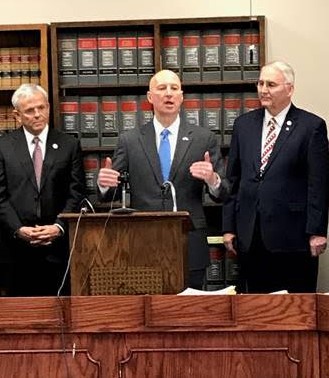 (KFOR NEWS  April 22, 2022)   Governor Pete Ricketts stopped into the Nebraska Law Enforcement Training Center in Grand Island to draw attention to bills which enhance public safety by investing in Nebraska law enforcement.   He was joined by numerous State Senators and law enforcement leaders from across Nebraska.

“Law enforcement agencies in Nebraska have earned a stellar reputation through their dedicated work to protect the public,” said Gov. Ricketts.  “This session, the Unicameral passed key legislation to help recruit, retain, and train officers.  Here in Nebraska, we’re going the extra mile to attract the best and brightest to serve in law enforcement.  We’re also committed to providing our officers with training and resources that are second-to-none.”

The Governor signed a ceremonial copy of LB 1241e, a bill streamlining the process for out-of-state law enforcement officers to gain certification to work in Nebraska.   It also helps law enforcement agencies grow their workforces by offering incentive payments based on years of service.

Video from today’s press conference is available by clicking here.