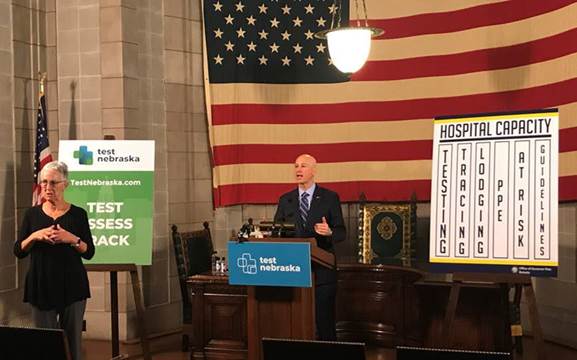 Gov. Ricketts (podium) provides an update on the State’s plan to Get Nebraska Growing.

Gov. Pete Ricketts has touted Nebraska’s pandemic response and rosier-than-expected revenue outlook in his address to the Legislature. He also pushed for lawmakers to adopt his signature property tax relief and tax incentives packages within the remain 13 days of the session. The Republican governor on Friday made a rare second address within the same session, which was suspended in March over fears of spreading the coronavirus.

The governor’s address came a day after the Nebraska Economic Forecasting Advisory Board predicted that while the state’s tax revenue will likely dip below earlier projections, the budget picture won’t be as bad as previously expected.