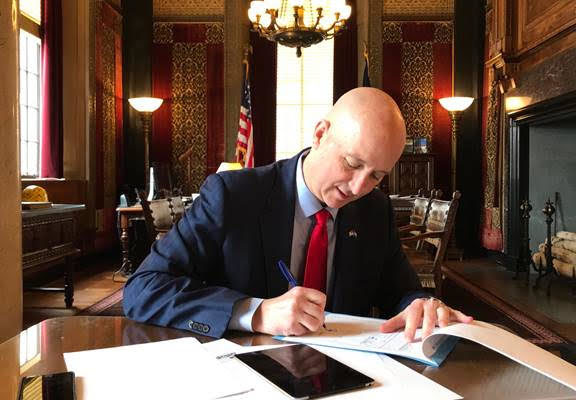 Lincoln, NE (April 6, 2021) Governor Pete Ricketts’ weekly column is highly critical of President Biden’s performance in office so far.  Ricketts said the President campaigned on a promise of  bringing America together.  In the weeks since then, Ricketts said the new President “has charted a very different course.  Instead of governing by building consensus, he has aggressively pushed a far-left agenda.”  Ricketts said the president “refused to compromise with Republicans on stimulus legislation.  Instead, he signed a coronavirus spending package that bailed out Blue states at the expense of states like Nebraska that had taken a better approach to the pandemic.”   The Governor said the President’s early actions have been “divisive rather than unifying, and they fail to respect the rights of states in our federal system of government.”

Ricketts went on to say that “When the Obama Administration tried to claim powers belonging to the states, we successfully fought back in court.  Nebraskans can expect us to take the same approach to the Biden Administration when its actions violate the rights we cherish.”

The Governor’s Column listed President Biden’s early initiatives that he is closely following.

The number one priority of Congressional Democrats is HR 1, which would lead to a federal takeover of elections.  Right now, elections are managed by the states.  In Nebraska, we set the rules that we believe are best for Nebraska.  Our state election laws have consistently overseen free and fair elections.  Democrats want to erode the measures that ensure election integrity in our state through a federal takeover.

President Biden has made the passage of the Equality Act one of his top priorities for Congress.  Don’t let the name of the bill fool you.  This bill is not about treating people fairly.  It’s an unprecedented attempt to punish Americans who have deeply held pro-life beliefs and traditional values on gender and sexuality.  At its core, the bill is an assault on religious freedom.  It specifically deprives Americans of protections guaranteed by the Religious Freedom Restoration Act (RFRA) of 1993.

For example, the Equality Act would expand the legal definition of discrimination on the basis of sex to include pregnancy.  Nurses or doctors refusing to perform abortions would risk being sued for “pregnancy discrimination.”  Under the Equality Act, medical professionals would not be able to claim their right of religious freedom as grounds for refusing to kill a preborn baby.  Again, that’s because the law strips away the legal protections of RFRA—a law that passed on a vote of 97-3 in the U.S. Senate.

While Nebraska has been strengthening protections for the unborn, the Biden-Harris Administration is heading in the opposite direction.  Early indications suggest President Biden is going to lead the most pro-abortion administration in American history.  On January 28th, President Biden ended the Mexico City policy.  This policy has been in effect under pro-life administrations beginning with President Ronald Reagan and bans U.S. foreign aid for non-governmental family planning agencies that perform or promote abortions.  By discontinuing the policy, the Biden Administration is authorizing taxpayer dollars to fund abortions around the world.  The Biden Administration is also rewriting Title X rules to again allow the flow of federal tax dollars to abortion clinics.

In January, President Biden issued an executive order on the climate.  It sets a goal of restricting “at least 30 percent of our lands and waters by 2030.”  The President has no constitutional authority to unilaterally restrict these lands, and this would potentially deprive people of their property rights.  It would also harm small towns and rural communities.

Our farmers and ranchers are the original conservationists.  An ethic of responsible stewardship is ingrained in our state’s ag culture.  For example, our state has become a global leader in agricultural irrigation while successfully managing our water resources—all without federal intervention.  Nebraska has more irrigated acres of land than any other state, and we also rank first nationally in groundwater abundance.  We have a track record of successfully managing our natural resources through responsible self-government.

In the wake of recent tragedies in Atlanta and Boulder, President Biden is attempting to build momentum for new gun control measures.  The President should work to address the underlying causes of violence in our communities rather than trying to roll back the right to bear arms.  This right is guaranteed by the U.S. Constitution and reasserted in Article I of the Nebraska Constitution.  Banning guns will not solve the problem.  Nebraska is a pro-Second Amendment state, and we will stand up against any attempt by the federal government to impede our freedoms through restrictive gun regulations.

The Governor concluded by saying “In our federal system of government, the 50 states have freedom to adopt different policies best suited to their unique needs.  President Biden needs to respect our rights.  “