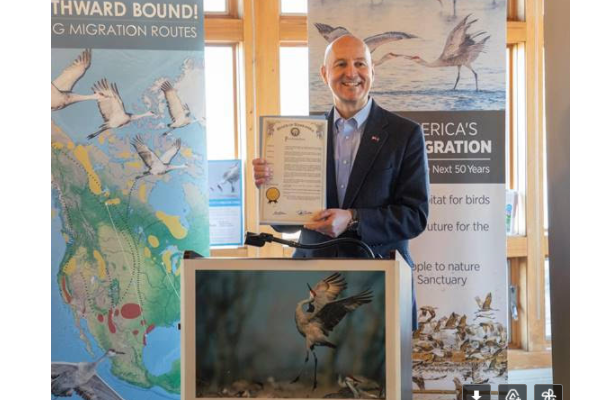 GIBBON, NE (March 16, 2022) – Today, Governor Pete Ricketts signed a proclamation designating the Sandhill crane as the official migratory bird of Nebraska during a ceremony at Rowe Sanctuary in Gibbon.

“Each spring, up to one million Sandhill cranes gather along the Platte River during their annual journey north,” said Gov. Ricketts.  “The migration is a majestic sight that attracts tens of thousands of spectators to central Nebraska.  Today, I’m declaring the Sandhill crane as the official State migratory bird in Nebraska.  This designation recognizes the Sandhill cranes’ migration as one of Nebraska’s most amazing natural spectacles.  It also recognizes the benefit of the cranes to the State’s tourism industry, which warmly welcomes out-of-state birdwatchers each year to marvel at their migration.”

Kristal Stoner, Executive Director of Audubon Nebraska, emphasized the importance of the Platte River as a wetland habitat for Sandhill cranes.

“The Platte River is a hard-working river,” said Stoner.  “Nebraskans rely on the Platte River for irrigation, drinking water, and recreation.  Every March, when the evening skies fill with soaring cranes and the rivers echo with their loud, rattling call, it reminds us that we are not the only ones that need this river.  Keeping the river healthy requires active management because what is good for birds is good for people.  Rowe Sanctuary has been here for nearly 50 years working to make sure the river is open and flowing, and providing thousands of people the opportunity to see cranes on the river.”

John Ricks, Executive Director of the Nebraska Tourism Commission, noted that the cranes’ annual migration is a major driver of tourism, attracting travelers from all over the world to Nebraska.

“The annual Sandhill crane migration is a unique, spectacular, and true Nebraska gem, offering visitors from around the world the opportunity to be awed by Mother Nature,” said Ricks.  “What the migration looks like, feels like, and sounds like simply cannot be expressed in words; it has to be experienced.”

The Governor’s proclamation is available by clicking here.