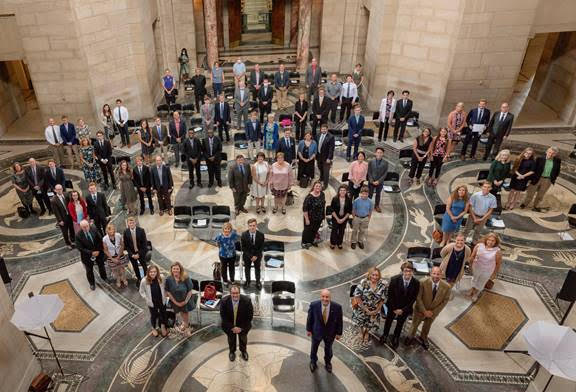 Today, Governor Pete Ricketts and the Nebraska Department of Education (NDE) hosted a ceremony in the State Capitol Rotunda to recognize graduates from the class of 2020 who achieved a top score on their ACT or SAT college entrance exam.

“Achieving a top score on the ACT or SAT is extremely hard to do,” said Gov. Ricketts.  “In Nebraska, 44 graduates in the class of 2020 have accomplished this remarkable feat.  Their top scores reflect years of hard work and academic discipline, as well as the contributions of their teachers and parents.”

NDE Commissioner Matt Blomstedt joined the Governor to recognize the students for their outstanding accomplishments.

“Perhaps no class has faced more challenges than the class of 2020.  These students have risen to the occasion and exceeded all expectations,” said Education Commissioner Matt Blomstedt.  “Congratulations to the outstanding Nebraska students who achieved a top score on the ACT.  These students are a great example of perseverance, hard work, and dedication.  We are all proud of their accomplishments and wish them the best in their bright futures.”

This year’s number of students with top scores (44) equaled the number of graduating seniors who achieved a top score in 2019.  The class of 2018 in Nebraska had 22 students who scored either a 36 on the ACT or 1600 on the SAT.

The graduating students who earned a top score are:

Video from today’s ceremony is available by clicking here.