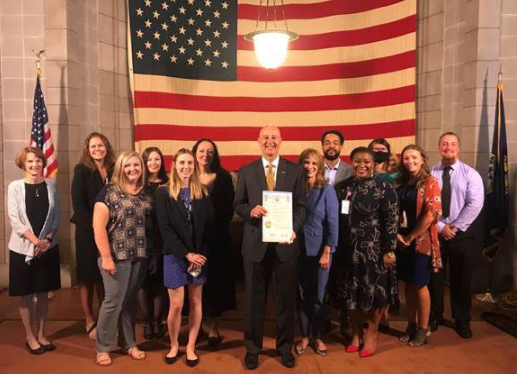 Gov. Ricketts proclaimed September 2021 as “Child Welfare Workforce Development Month” in appreciation of the work done by State employees, agencies, and partners to provide critical services to children and families in Nebraska.  He credited leaders across the state for helping Nebraska to rank #7 nationally in Annie E. Casey Foundation’s 2021 state rankings of child well-being.  That’s up from #12 in 2019 and #9 in 2020.

First Lady Susanne Shore highlighted the significant improvements Nebraska has made in measures of child welfare over the past nine years.  These include reducing the rate of children living in poverty from 18% to 11% and lowering the number of teen births per capita.

President and CEO of Nebraska Children and Families Foundation (NCFF) Mary Jo Pankoke  overviewed the work of Bring Up Nebraska, a statewide prevention partnership advocating for local community collaboratives as they work to protect children, support parents, and help families address challenges.  NCFF plays the lead administrative role for Bring Up Nebraska in its activities around the state.

Director of the State Division of Children and Family Services (CFS) Stephanie Beasley thanked the State’s child welfare team members, and announced that Nebraska is one of four jurisdictions selected to participate in round one of the Thriving Families, Safer Children partnership.  The multi-year initiative will provide resources and support to facilitate the transition from a traditional, reactive child protection model to a system that proactively supports child and family well-being and prevents child maltreatment and unnecessary family separation.  The State will receive support from Children’s Bureau, Casey Family Programs, the Annie E. Casey Foundation, and Prevent Child Abuse America as part of the Thriving Families initiative.  Several communities across Nebraska submitted applications to receive expertise from Thriving Families partners in the first round of the initiative, and five were selected for immediate support.  Those communities include Douglas County, Hall County, the Winnebago Tribe, Platte/Colfax Counties, and Dakota County.