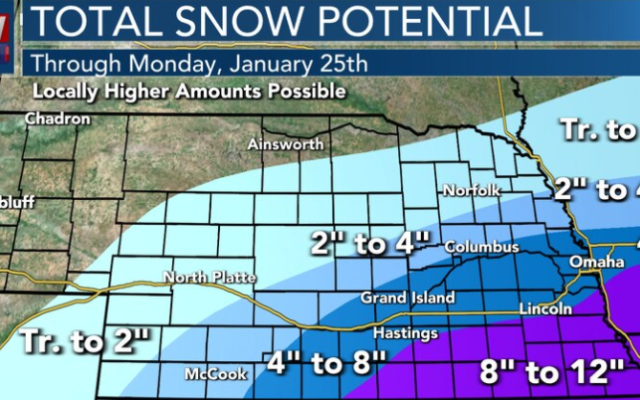 (KFOR NEWS  January 24, 2021)   Our weather partner, 10/11 NOW reports Winter Storm Watches are in place across south central and southeastern Nebraska for Monday and into early Tuesday morning.  Lincoln and Omaha have the highest potential for some significant snowfall accumulations through this time frame.

We’re expecting moisture to surge northward Sunday night into early on Monday with snow showers, potentially mixed with some freezing drizzle or freezing rain to start Monday before any precipitation will turn over to all snow through Monday morning. Snow intensity should peak through the morning into Monday afternoon, and we could see snowfall rates of 1″ to 2″ per hour at times. We could even have some thundersnow across the area as there is a least some instability forecast with this system.

Wet, heavy snow will continue through most of the day on Monday with snow even lingering into early on Tuesday. Total snowfall amounts will be highest in the southeastern corner of the state, where they could see 8″ to 12″ of snow. For Lincoln and the surrounding area, the going forecast as of now, is for 4″ to 8″ of wet, heavy snow. Further to the north and northwest, snowfall amounts should drop off fairly quickly.

Another round of light to moderate snow is possible Tuesday evening into early on Wednesday that could drop a few more inches of snow across the area. The weather should quiet down considerably for the second half of the week into next weekend.