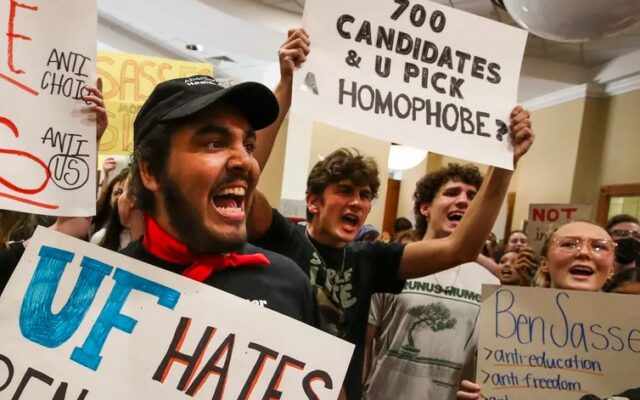 Aron Ali McClory, a second-year student, leads a chant during a protest outside the President’s Ballroom at Emerson Alumni Hall on the University of Florida campus as U.S. Sen Ben Sasse of Nebraska was scheduled to speak on Monday, Oct. 10, 2022. Sasse visited the Gainesville campus following Thursday's announcement that he is the lone finalist to be the school's next president. [ DIRK SHADD | Times ]

(KFOR NEWS  October 11, 2022)  Nebraska U.S. Republican Sen. Ben Sasse faced pointed questions and loud protests Monday during his first visit to the University of Florida as the lone finalist for the school’s presidency.

Sasse, a Republican in his second Senate term, has drawn criticism from some at the school in Gainesville, Florida, for his stance on same-sex marriage and other LBGTQ issues.  Others question his qualifications to run such a sprawling school with more than 50,000 students.

The separate meetings Monday were with students, faculty and staff on campus.  During those sessions, the Gainesville Sun reported about 1,000 people yelling “Hey, hey, ho, ho, Ben Sasse has got to go” gathered and disrupted at least one of the meetings.

“Sasse does not really believe in equality on the basis of sexual orientation,” said Nathan Knorst, a senior at the university. “So, how can he adequately represent the student body and faculty and UF’s core values, which are diversity, equity and inclusion?”

Sasse, 50, was previously president of Midland University in Fremont, Nebraska, which has just over 1,600 students.  He said during one meeting Monday when asked whether he opposes same-sex marriage that it is the national law as ruled upon by the U.S. Supreme Court and that his goal is to create a “place of respect and inclusion for all Gators,” mentioning the Southeastern Conference school’s sports mascot.

Sasse also said he believes in human causes for climate change but has not always supported federal efforts to deal with it.

Some students were concerned about the secretive selection process used in selecting Sasse.  A new Florida law allows universities to conduct much of the process outside of the state’s open meetings and public records laws.

Sasse, who has also been a rare GOP critic of former President Donald Trump, said the students have every right to protest.

“Obviously I wish they didn’t have the position they have but I strongly support the right of people to protest and exercise their free speech rights,” he said.

Sasse, who would resign from the Senate to take the position, was recommended for the school’s presidency by a search committee. He still faces a vote by the school’s board of trustees and then must be confirmed by the state board of governors.