Lincoln, NE (July 12, 2021)  – Big Ten Player of the Year Spencer Schwellenbach heard his named called Monday afternoon during the second round of the 2021 Major League Baseball Draft when he was taken 59th overall by the Atlanta Braves.

Tabbed an All-American by five different publications in 2021, including a first-team pick by D1Baseball and ABCA/Rawlings, Schwellenbach ranked in the top 10 in the Big Ten in runs, RBIs and walks, while in the field he committed just four errors in 186 chances. He made his debut on the mound in 2021, and led the Big Ten with 10 saves and did not allow a run in 17 of his 18 appearances. He fanned 34 in 31.2 innings and held opposing hitters to a .198 average. His last appearance on the mound was a season-high 4.2-inning shutout relief appearances in the NCAA Tournament over then No. 1 Arkansas on June 6.

Junior Cade Povich was the second Husker baseball player to be taken in the 2021 MLB Draft, as he was the 98th overall pick by the Minnesota Twins in the third round.

A 2021 first-team All-Big Ten selection, Povich anchored Nebraska’s rotation this season. Povich posted a 6-1 record and a 3.11 ERA over 15 starts, with 88 strikeouts to 22 walks. Povich posted double-digit strikeouts in a game twice in 2021, including a career-high 12 in 6.0 innings against Ohio State on March 12. The 6-3 left hander thrived in his first full season in Lincoln after he was limited to just four starts during the COVID shortened 2020 season. A native of Bellevue, Neb., Povich went to South Mountain CC for one season before returning to Nebraska.

Povich and Schwellenbach are the first Husker teammates to be taken in the first three rounds of the MLB Draft since 2005 when Alex Gordon was the No. 2 overall pick by Kansas City and Brian Duensing was selected in the third round by Minnesota.

Rounds 2-10 of the 2021 MLB Draft take place today, and the draft concludes on Tuesday with rounds 11-20 starting at 11 AM. A live video stream for Monday and Tuesday can be found on MLB.com. 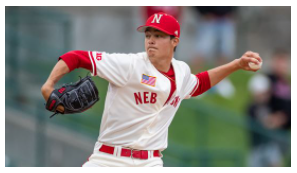